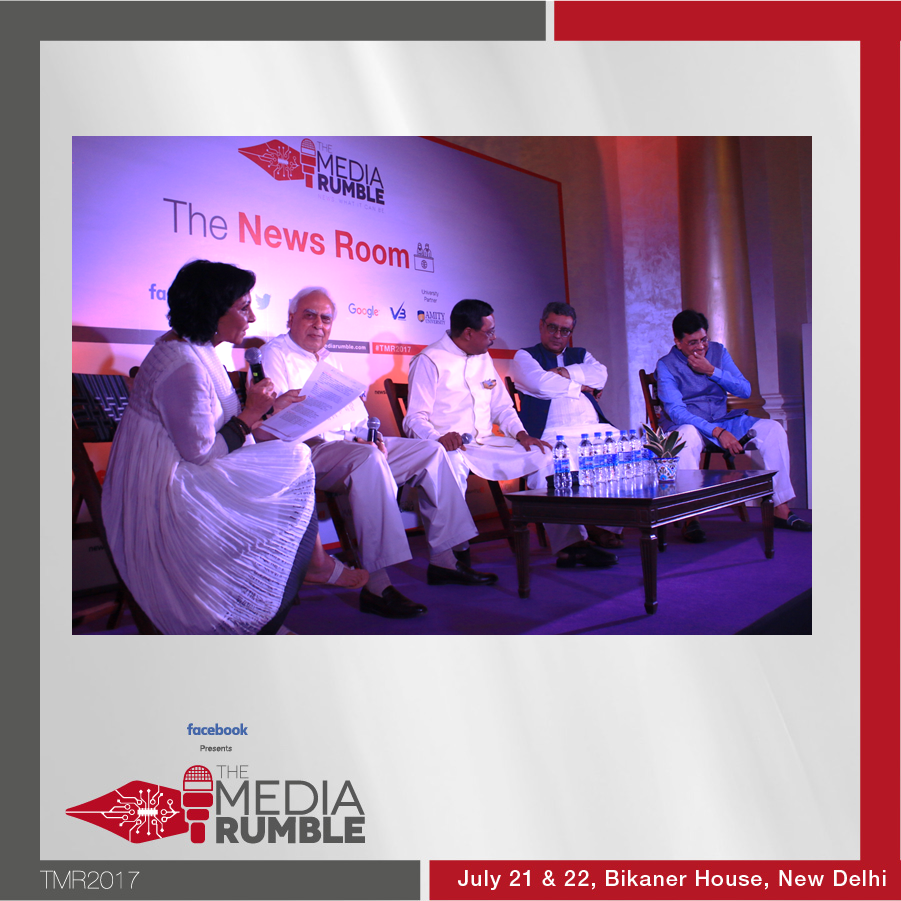 Speaking Truth to Power: The role of media in governance among discussions on Day 2 at The Media Rumble

Report by Rashmi Ranjan Parida, New Delhi:On the final day of the two-day news forum, The Media Rumble (TMR), a first-of-its-kind forum, organised by Newslaundry and Teamwork Arts, featured engrossing sessions on the media speaking truth to power, the might of the Lutyens’ media, the plague of fake and fictional news, the media-government interface and the viability of subscriber-funded media.

The day began with a Sreenivasan Jain-moderated panel, Speaking Truth to Power, discussing how journalists are taking on the governing establishments across the world. The panel included Caravan political editor Hartosh Singh Bal, a California-based journalist and author Sarah Shourd and Suki Kim, an award-winning writer who went undercover in North Korea to report on the country’s current state of affairs.

Other panels of the day, The Power of Lutyens Media, News as Investment, False News in the Post-Truth World, The Relationship between Media & Government and Talking Investigative Journalism, discussed a range of subjects including money and media ownership, the days of legacy media and reporting from hostile spaces.

Even as Speaking Truth to Power discussed the role of journalism in taking on establishments and bringing about a change in the relationship between media, politics and business, and its impact on government policy, it had journalists sharing the threats they faced as well. Adding to which, Kim said, “Not only has foreign policy, but also journalism has absolutely failed when it comes to North Korea.”

The second session, The Power of Lutyens Media, was moderated by Ashok Malik, the newly-appointed press secretary to the incoming President of India, and the panel included media veterans such as Kanchan Gupta, Bloomberg View columnist Mihir Sharma, journalist Nalini Singh and Rajya Sabha MP Swapan Dasgupta. The panel discussed the credibility of mainstream media and the problems facing Lutyens’ media, to which Gupta said, “The problem with Lutyens’ media is that you decide what is good for your reader, you set the agenda.” He also said that media themselves are responsible for their lack of credibility. Following a critique of the Lutyens’ media’s coverage, Dasgupta said, “If you wish to do away with Lutyens’ media mindset, you have to do away with Lutyens.”

The third panel, News as Investment, included Bala Srinivasa, Rajeev Chandrasekhar, Siddharth Nautiyal and Siddharth Yog with moderator Abhinandan Sekhri. While Nautiyal, an investment partner at Omidyar Network, spoke about media as a classy industry for innovation and investment, Chandrasekhar, a two-time Member of Parliament to the Rajya Sabha and prime investor in Arnab Goswami’s Republic, spoke about news as a source of revenue and the need to get out of the mindset that news is not profitable.

False News in the Post-Truth World, the fourth panel for the day, included founder of IndiaSpend and BOOM Govindraj Ethiraj, co-founder of AltNews Pratik Sinha, editorial director of Swarajya R Jagannathan, deputy editor of HuffPost Shivam Vij and moderator Abhinandan Sekhri of Newslaundry. The panel discussed the entrenchment of fake news to which Vij said, “Fake news is now a proper formalised industry. These days even what the government puts out is fake news and what we are seeing is just a trailer,” while Jagannathan said, “We need many, many more fact-checking sites.”

The final session, Talking Investigative Journalism, featured Boston Globe’s Michael Rezendes, Delhi-based independent journalist Neha Dixit and executive editor of The Indian Express Ritu Sarin, moderated by Newslaundry’s Madhu Trehan. The panelist discussed how investigative stories are stifled to which Sarin said, “I can say with pride that at The Indian Express, I have never been asked to kill a story.”

With that the two-day rumbling of news houses and those who make news came to a close.