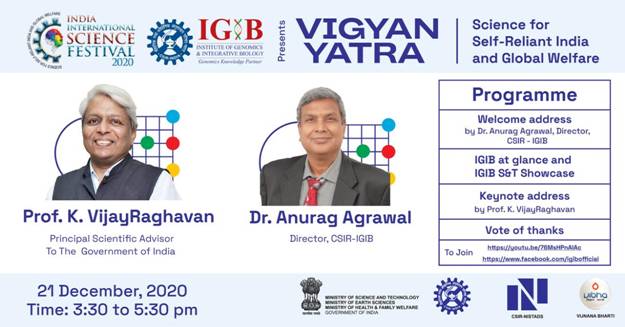 Special Lecture on History of Indian Science by Alagappa University

New Delhi: In the run up to the India International Science Festival 2020, CSIR-Institute of Genomics and Integrative Biology (CSIR-IGIB), New Delhi participated in the Vigyan Yatra on December 21. The Director of CSIR-IGIB, Dr. Anurag Agrawal, kicked off the online program with a reminder of Article 5A(h) of the Indian Constitution which states that it is the duty of every citizen of India to develop the scientific temper, humanism and the spirit of enquiry and reform, stressing how the solution to many problems of the modern world lie in science. Dr. Agrawal emphasized that the rapid response of the scientific world to fight against the COVID-19 pandemic came from years of investment into good science, irrespective of the classifications of basic and applied.

Prof. K. VijayRaghavan, Principal Scientific Advisor to the Government of India delivering the keynote address noted how building redundancy into our scientific establishments is essential for a fast and nimble response in an emergency such as the COVID-19 pandemic. He spoke about how science in post-COVID era cannot stand isolated but rather had to move forward hand in hand with industry and society. Constant dialogue, challenges and counter-challenges from one to the other are important for us to keep our research relevant and responsive, he added.

A short video was screened highlighting the achievements of IGIB in the areas of genomic medicine. IGIB has a major focus on genomics with special emphasis on genomics of human diseases; from the sequencing of the first Indian genome in 2009 to sequencing the genome of 1000 Indians, to creating a reference database of Indian genomes for precision medicine development. The expertise in genomics also allowed the institute to rapidly sequence large numbers of COVID-19 samples when the pandemic struck India early this year. CSIR-IGIB has also been leading the fight against COVID-19 by developing a paper-based RNA diagnostic system called FELUDA based on the CRISPR-Cas9 system. This development was the result of already ongoing research into developing CRISPR-diagnostics for sickle cell anemia. IGIB is also using stem cell technology to correct genetic diseases such as sickle cell anemia and thalassemia, which has a wide prevalence in the country. Finally, research at CSIR-IGIB has led to the birth of a modern scientific discipline known as Ayurgenomics. Ayurvedic doctors and genomics scientists have over the years worked together to identify a genomic correlate for the Prakriti-based stratification of population used in Ayurveda.

Alagappa University organized a Special Lecture on “History of Indian Science” under the banner of India International Science festival (IISF) through the virtual platform to promote history of science in India. The event was conducted to create awareness amongst the youth about the Indian Civilization and its imprints across the globe. Total 600 participants, including Undergraduate students, post-graduates, research scholars and school students from various colleges, institutes and schools from the Sivaganga District of Tamil Nadu joined the event.

Prof. N. Rajendran, Vice-Chancellor, Alagappa University, Karaikudi mentioned about the very evolution of science as the struggle against nature. He also highlighted that the CharakaSamkitha invented anciently is used for 150 surgeries alongside shusritha.

Prof. S. Sivasubramainan, Former, Vice-Chancellor, Bharathiar University, Coimbatore in his special address emphasized upon the nature, types, fields and need of science through which scientists have plied their craft not because of the importance for glory or material award but to satisfy their own curiosity about the way the world works.

Dr. D.K. Hari, Founder, Bharath Gyan, Chennai in his Keynote speech said, “India has been noted to be the scientific country right from Vedic to modern times with the usual fluctuations that can be expected of any country”.

Dr. Rakesh Kumar, Director, CSIR-NEERI in his welcome address cited some interesting examples where science could be applied for betterment of the people and environment. Students can do better if they are innovative, creative, and think out of the box, he added.

iednewsdesk Jan 19, 2022
Earth’s surface is in constant flux, resulting in the formation of many geologic features, like long chains of…

Yonsei University: New Study Yields the Inside “Dope” on…