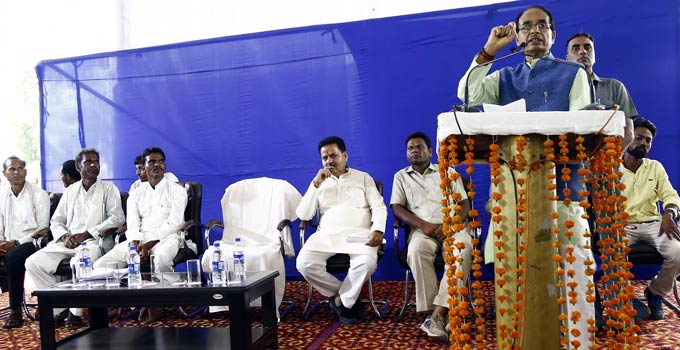 Bhopal : Chief Minister Shri Shivraj Singh Chouhan said that a special campaign will be launched for recruitment of police constables for Sahariya, Bhariya and Baiga tribal youths. They will be able to skip the written examination of VYAPAM. The candidates will be selected in the basis of merit and will also be entrusted with the operation of mines. A campaign will be launched to remove illegal encroachments from their land and make pucca houses available to them. Separate employment fairs will be organised for them. The Chief Minister was addressing members of Sahariya, Bhariya and Baiga Sangathan at his residence. Public Works Minister Shri Rampal Singh was also present on the occasion.

CM Shri Chouhan said that government will support those lagging behind in the race for development. Government will leave no stone unturned in making opportunities available to them so that they too can live respectably. Shri Chouhan called for making the organization strong. As per availability, the Superintendents and Wardens of ashrams and hostels appointed will be from the scheduled tribes. He assured that the fair price of forest produce will be made available for the collector. Giving information about the arrangement for purchase of forest produce on support price, the Chief Minister said that these tribal forest produce collectors are being provided shoes and slippers under the Charan Paduka Yojana and with thermal bottles of cold drinking water in the forest. Shri Chouhan said that compensation-deprived residents of 28 rehabilitated villages of Palpur Kuno Sanctuary will be compensated within coming two months and this will be duly monitored by the Divisional Commissioner.

CM Shri Chouhan said that the illegal encroachers on the land belonging to Sahariya-Bhariya and Baiga tribes will be forcefully removed for which a special campaign will be launched. Ilegal transport of minerals will not be tolerated. Arrangement is being made to run mines through the scheduled tribes so that youths get employment. Special provision will be made for this. He said that in case of any information about grabbing land from these poor persons belonging to the scheduled tribes against loans, they will be forced to give the land back to them. He said that sale of illicit liquor will be sternly prohibited. Those found selling liquor illegally will be penalized. A campaign to free the society of addictions will be launched. Stern action will be taken on any information about forced labour.

Shri Chouhan said that relying only on government jobs and farming to remove poverty is not possible. Employment should be generated through animal husbandry and other industries and professions. Youths should acquire ITI training also so that new employment and self-employment opportunities are generated. He said that the government has launched the Mukhya Mantri Swarozgar Yojana in which government is providing the guarantee of loans from Rs 50,000 upto Rs 10 lakhs. A grant of 15 percent and 5 percent interest subsidy till 5 years is given. The Chief Minister said that youths of these tribes become job givers rather than job seekers. He said that detailed information about the expectations and hopes of Bhariya, Sahariya and Baiga tribes at a meeting to be organized in Sheopur and Karahal soon.