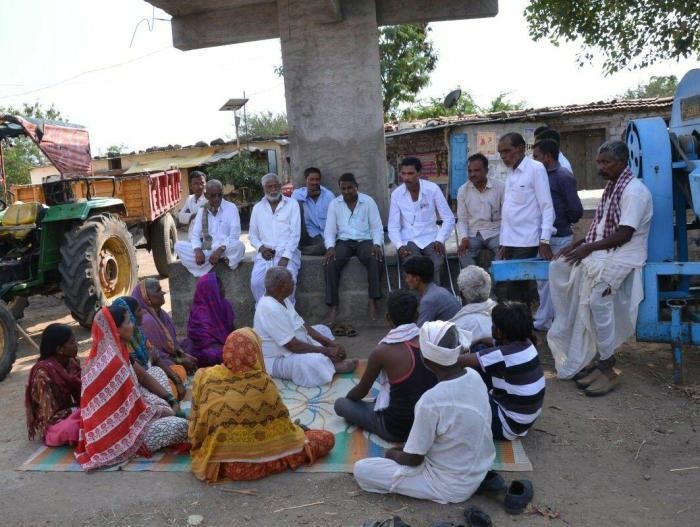 Nanded (Maharashtra): Sunil Kishan Rao Koknare, a specially abled man from Nanded district of Maharashtra has inspired thousands of villagers to join the Swachh Bharat Mission by making them understand the importance of adopting safe sanitation practices. His efforts have brought a noteworthy behavioral change which has motivated the villagers to construct and use toilets.

Today, villagers from Nanded district take pride in the 1,30,000 toilets that they have constructed in three months since Sunil Kishan Koknare sensitized them about the hazards of open defecation and the benefits of using a toilet. He also informed them about the basic steps of constructing the toilet as well as maintaining them for proper usage.

An accident in 1997 left serious injuries to Koknare who was extensively paralyzed for few years. While his condition became better over the years, he still needs to take support of crutches in order to walk. However, these serious injuries did not stop him in doing what he always loved doing, i.e empowering people.

Initially, the sanitation coverage in these villages was really low and though people were told about the health risks that open defecation posed, it did not motivate them enough to construct toilets. Koknare realized that changing people’s behavior was crucial and it required a lot of interpersonal communication to convince them to change their old habit of open defecation.

It was during one of the ODF workshop meetings that Koknare met the CEO of the Zila Panchayat, Ashok Shingare who was there to review the performance of the gram sevaks. When Koknare had to address the gathering, he was struggling to get up due to his injuries and Ashok Shingare told him while helping him to stand up, “if you can stand on your own, you will be a motivation for all of us.”

Determined to overcome the challenge, Koknare stood up without any support and remained standing for several minutes, receiving a standing ovation from all those gathered there.

Talking about the incident, Koknare says, “It was a defining moment as it motivated me to overcome my challenges. Since then I have repeatedly walked through these villages with the help of crutches and went from door to door to convince people to build toilets at home.”

Koknare also held workshops at street corners to highlight the importance of sanitation. His actions made the sanitation coverage shoot up dramatically as these villages registered construction of 1,30,000 toilets.

During this cleanliness drive, Koknare was supported by Zilla Swachh Bharat Prerak Kundgulwar Kaushik Kumar, who has also contributed significantly to the mission by holding workshops and using positive-triggers to motivate people to build toilets and sustain the new good habit.