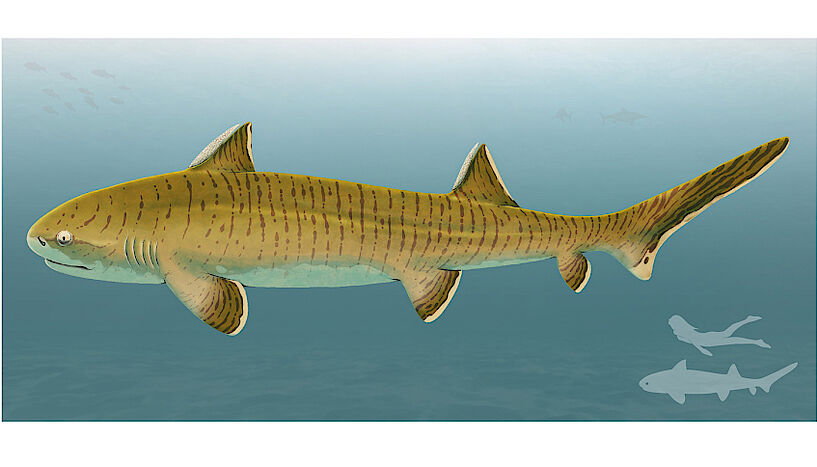 Spectacular fossil discovery: 150 million-year-old shark was one of the largest of its time

In a new study, an international research team led by Sebastian Stumpf from the University of Vienna describes an exceptionally well-preserved skeleton of the ancient shark Asteracanthus. This extremely rare fossil find comes from the famous Solnhofen limestones in Bavaria, which was formed in a tropical-subtropical lagoon landscape during the Late Jurassic, about 150 million years ago. The almost complete skeleton shows that Asteracanthus was two-and-a-half meters long in life, which makes this ancient shark one of the largest of its time. The study is published in the journal “Papers in Palaeontology”.

The Solnhofen limestones in Bavaria, Germany, which were formed during the Late Jurassic, about 150 million years ago, is such a rare occurrence. They are world-renowned for having produced skeletons of the small feathered dinosaur Archaeopteryx and have yielded numerous shark and ray skeletons, recovered during excavations over the past 150 years. A new study published in the journal “Papers in Palaeontology” and led by the paleontologist Sebastian Stumpf from the University of Vienna presents the largest fossil shark skeleton that has ever been discovered in the Solnhofen limestones. The specimen is represented by an almost completely preserved skeleton of the extinct hybodontiform shark Asteracanthus, the total length of which was two-and-a-half meters in life, which made it a giant among Jurassic sharks.

Hybodontiform sharks, which are the closest relatives of modern sharks and rays, first appeared during the latest Devonian, about 361 million years ago, and went extinct together with dinosaurs at the end of the Cretaceous, about 66 million years ago. They had two dorsal fins, each supported by a prominent fin spine. The body size of hybodontiform sharks ranged from a few centimeters to approximately three meters in maximum length, which consequently makes Asteracanthus one of the largest representatives of both its group and its time. In contrast, modern sharks and rays, which were already diverse during the Jurassic, only reached a body size of up to two meters in maximum length in very rare cases.

Asteracanthus was scientifically described more than 180 years ago by the Swiss-American naturalist Louis Agassiz on the basis of isolated fossil dorsal fin spines. However, articulated skeletal remains have never been found – until now. The dentition of the skeleton is exceptionally well-preserved and contains more than 150 teeth, each with a well-developed central cusp that is accompanied on both sides by several smaller cusplets. “This specialized type of dentition suggests that Asteracanthus was an active predator feeding on a wide range of prey animals. Asteracanthus was certainly not only one of the largest cartilaginous fishes of its time, but also one of the most impressive.” says Sebastian Stumpf.

U of A study shows anxiety, depression more likely among football players after a concussion than after other body injuries.