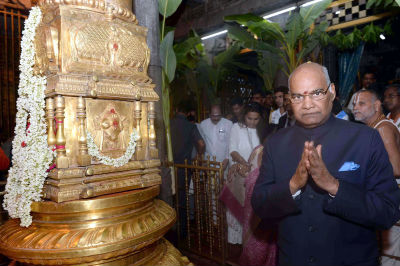 This is only my second visit outside Delhi since being elected as the President of India. My first visit had taken me to our valiant soldiers in Leh, in Jammu and Kashmir. And I am honoured that my second trip has brought me to Andhra Pradesh, which is one of our most dynamic and cherished states. I am doubly blessed at the opportunity of coming to the sacred soil of Tirupati and getting a darshan of Lord Balaji.

The people and history of Andhra Pradesh are a pride for every Indian. This is a land of great heroes and great achievements. From the Satavahana Empire of ancient times to the leadership of people like T. Prakasam, whom we remember with reverence as “Andhra Kesari”, this region has given the country so much. In recent times, Andhra Pradesh has been fortunate to have given birth to at least two far-sighted political leaders – the late Chief Minister Shri N.T. Rama Rao and our former Prime Minister, Shri P.V. Narasimha Rao. This region has produced three Presidents in the past Late Dr. S. Radhakrishnan, Late Shri V.V. Giri and Late Shri Neelam Sanjeeva Reddy. You have also given me an invaluable colleague – Shri M. Venkaiah Naidu as Vice President.

Three years ago, Andhra Pradesh made a new beginning. Under the capable leadership of Shri Chandrababu Naidu, it is making rapid progress in many fields. The Union government is giving all-out support for the welfare and uplift of the people of Andhra Pradesh. I had recently visited Vijayawada and was very impressed by its development. I am looking forward to one day visiting the new capital of Amaravati, which is being built as a city with 21st century technology.

In so many areas of human endeavour, the people of Andhra Pradesh are role models for the country. Farmers from this region have contributed substantially to our rice production, among other crops. In adoption of technology for social development programmes, Andhra Pradesh has shown the way to the rest of India. Andhra IT and infrastructure companies are famous nationally and internationally.

All over the world, Telugu people are shining success stories. In the United States, the dedication and accomplishments and doctors from Andhra Pradesh have won widespread recognition. This makes all of us proud.

Friends
Andhra Pradesh’s social and economic achievements in the past few years mirror the transformation of India. Yet, as we march forward, we must ensure that this is a journey for all – and not just a journey for some. I am happy that the Government of Shri Chandrababu Naidu is taking all measures for the welfare of the poorer and marginalised sections of society.

This is a vision that is in keeping with what the Father of our Constitution, Babasaheb Bhim Rao Ambedkar, taught us. He emphasised the values of education and human dignity. Benefits of all welfare schemes must reach the last house in the village. And the Government of India and the Government of Andhra Pradesh are jointly striving in this direction.

That is why the purpose of my visit here is so personally satisfying for me. The Ambedkar Skills and Training Academy is planned as a modern marvel in Tirupati – a world-class job-oriented centre that will focus on youth from marginalised communities. It will train them in skills that will help them get employment in government and private organisations.

This function also commemorates two other parallel initiatives of the Government. The first is Stand-Up India, a Government of India scheme that is facilitating bank loans from Rs 10 lakh to Rs 1 crore to individual entrepreneurs or small enterprises belonging to those from marginalised sections.

This is a very important scheme – because it provides poor people the chance to become job creators. In Andhra Pradesh, entrepreneurship is in the DNA of society. This is the energy of youth that Stand-up India seeks to channel.

The second parallel initiative is the Land Purchase Scheme of the Andhra Pradesh Scheduled Castes Co-operative Finance Corporation. This provides agricultural land to women members of traditionally marginalised communities. It boosts the earning potential of women, and gives them a solid economic asset in the form of a land holding. It also empowers them socially and within the family.

I congratulate the Andhra Pradesh government for this initiative. This scheme will not just change the life of an individual woman, but that of an entire family. Women, nurturing the family at home and toiling in the fields or workplace, are the backbone of our society. Economic empowerment of women will bring about social change.
Friends
Earlier today, I was privileged to visit the Sri Venkateswara Institute of Medical Sciences, within which is the Sri Padmavathi Medical College for Women. There I inaugurated a new hospital building. I wish and pray that the hospital and its team of dedicated doctors, nurses and care-givers ensure the good health and well-being of the people of Tirupati and surrounding areas.

May Lord Venkateswara bless us all!

Education and Skilling are the most focused areas of GMR Varalakshmi Foundation: Meena Raghunathan

University of Aberdeen: University part of UK-Japanese research collaboration to…

University of Manchester: Pandemic ‘shielding’ led to two-fold rise in…