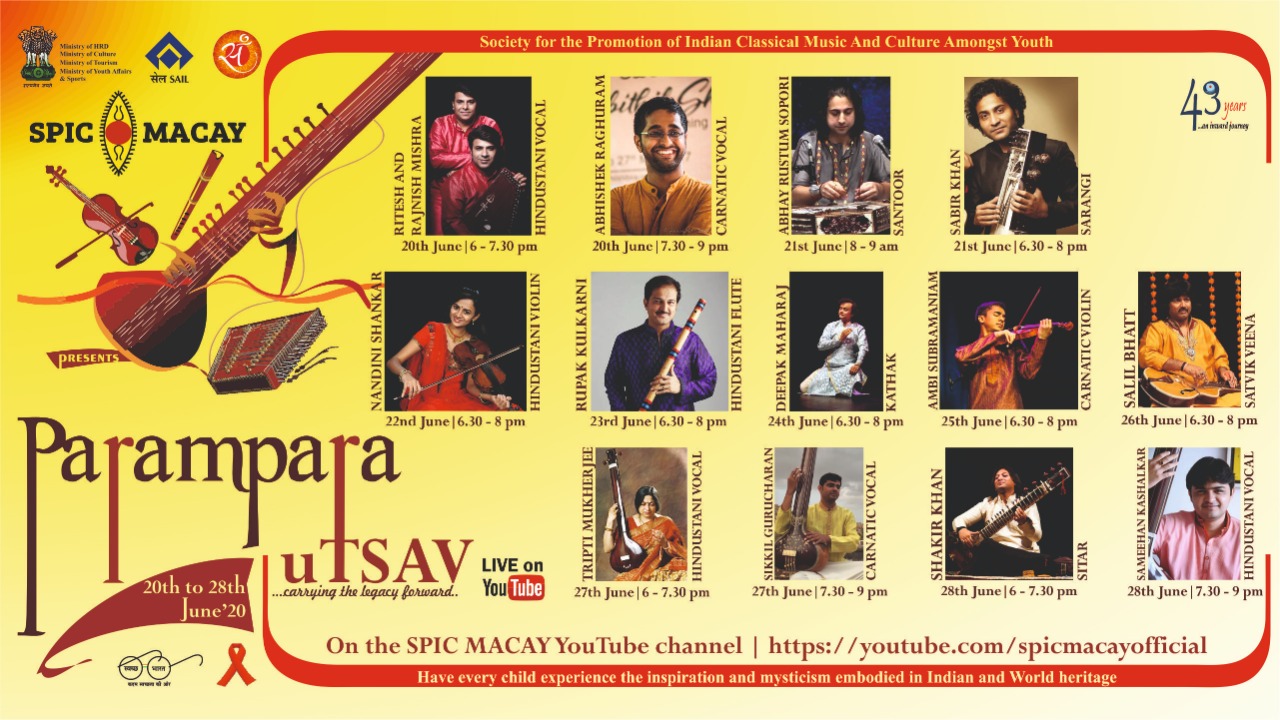 New Delhi: After the overwhelming positive response received from students across the globe for the International Yoga Day Intensives held by SPIC MACAY during 17th-21st June ,where more than 15000 students from all over the globe participated in Yoga sessions, SPIC MACAY is organizing the Parampara Utsav, its latest digital initiative to reach out to the young students and give opportunity of extracurricular learning amid the academic schedules by bringing the new generation of artistes who are taking the legacy of Indian classical music forward, closer to the students on the digital platform. This will give exposure to students about the Indian culture and its heritage by experiencing live interactions and concerts by eminent artists of Classical Music.
Parampara is one of its kind event that seeks to build a connection between the youth of the country and the new generation of artistes who are taking the legacy of Indian classical music forward. Parampara Utsav will be streamed live on the SPIC MACAY YouTube channel from 6 pm IST.
While the young and versatile artistes are the torchbearers of our glorious heritage, the younger generation helps in sustaining it. The convener of the Parampara Utsav, Smt. Sujata Kully, mentioned,” the concept of a series like Parampara originated from the idea that we need to bring the young artist and students on the same platform. To achieve this goal of bringing these two aspects of cultural world together, SPIC MACY has collaborated with more than 20 host schools and colleges across the country. The entire school will be attending the program as part of the extracurricular learning activity for the school student, as part of their academic learning schedule. Each of these schools will be hosting an interaction session with one of the many brilliant young artists for their students. This session will be followed by a concert by the artist. Not only will this kind of interaction with the artists motivate the students during these tough times, it will also serve as a platform for the children to experience our great art forms and heritage of our country and also take lifelong lessons and learning as part of their internal assessment activities”.
The Parampara Utsav was inaugurated with an engaging interactive session with the Hindustani Vocal duo Pt. Ritesh and Pt. Rajnish Mishra. Pt. Ritesh and Pt. Rajnish Mishra shared various nuances and aspects of being one of the successful duet performers of classical music today, under the guidance of Padma Bhushan Pt.
Rajan Misra (Father) and Pt. Sajan Misra (Uncle). Duet singing in the Indian Classical Music is considered a very difficult art, for it requires not only individual competence but, great amount of self-control to improvise and harmonize at the same time. They emphasized to the youth on the importance to stay composed and focused their energies on positive and activities , during the current times and added that listening or learning music will give the youth menta strength, peace of mind needed to adapt to the current scenario.
This was followed by a webcast of their concert where the artist duo rendered Raag Gorakh Kalyan.
They talked of how duet singing is all about complimenting each other for them and they always wish to emanate love through their performances. They also emphasized the need for youth to become good listeners of music, if not play or practice it.
This was followed by a Carnatic Vocal performance by Abhishek Raghuram who is known for his unconventional approach of giving diverse expressions to the classical ragas. Shri Raghuram comes from the rich lineage of Shri Palghat Raghu, his paternal grandfather and the legendary violinist Lalgudi Jayaraman.
As a part of the second day of Parampara Utsav, and on the occasion of the World Music Day, there was a morning interaction session and a live concert by Abhay Rustom Sopori, son of Pt. Bhajan Sopori. The session was hosted by Kendriya Vidyalaya RK Puram Sector 8. After speaking about the journey of Santoor in Indian Classical Music, he also talked about the meditative effects of the sound of the Santoor, along with a short demonstration also. This was followed by a mesmerizing live concert in the Sufiyana style of Raga Music om Santoor, called Sopori Baaj. It was a beautiful rendition of the meditative raga, Raga Basant Mukhari. He also played some of his signature Kashmiri dhuns .
The evening session on the 21rt will feature a live interaction and concert by Sabir Khan – Sarangi, the musical prodigy from the Sikar Gharana of music. He is the ninth generation of Sarangi player and son of legendary Sarangi player and vocalist Padma Bhushan Ustad Sultan Khan.
The sessions from 22nd June to 28th June will feature live interactions and concerts by eminent young and dynamic artists as per following line up:
22nd – Nandini Shankar (Grand Daughter of legendary violinist Dr N Rajam and daughter of acclaimed violinist Vid. Sangeeta Shankar )
23rdJune –Pt. Rupak Kulkarni – Flute (Son and disciple of Shri Malhar Rao Kulkarni and disciple of Pt. Hariprasad Chaurasia)
24thJune – Deepak Maharaj – Kathak ( Son and disciple of Kathak dance legend Pt. Birju Maharaj),
25thJune – Ambi Subramaniam – Violin ( Son and disciple of Violin virtuoso Dr. L Subramaniam) ,
26thJune – Pt Salil Bhatt on Mohan Veena ( Son and disciple of Pt Vishwa Mohan Bhatt)
27thJune – Tripti Mukherjee – Hindustani Vocal (Disciple of Pt. Jasraj), Sikkil Gurucharan( Carnatic Vocal) ( Son and disciple of Sikkil Kunjumani)
28thJune – Shakir Khan – Sitar ( Son and disciple of Ustad Shahid Parvez Khan), Sameehan Kashalkar- Hindustani Vocal ( Son and disciple of Pt Ulhas Kashalkar)
Registration of students for Parampara series can be done at zero cost at https://spicmacay.org/Paramparautsav2020 and will be streamed live on SPIC MACAYs youtube channel at https://youtube.com/spicmacayofficial

SPIC MACAY also concluded the 5-day long Yoga Session on the International Yoga Day with more than a lakh participant from all over India benefiting from it. The session concluded with video addresses from honorable dignitaries including the honorable vice president of India Shri. M. Venkaiah Naidu, Honorable Governor of Kerala Shri Arif Mohammad Khan, Honorable minister of Ayush Shri Shripad Yesso Naik, Deputy CM of Tripura Shri Jishnu Dev Verma and Honorable former minister of commerce and Indian Emissary to G20 Shri Suresh Prabhu.
The Honorable Vice President of India, Shri M. Venkaiah Naidu congratulated SPIC MACAY for successfully conducting Anubhav series and the 5-day long Yoga Sessions. He talked of how Yoga has now become a potential source of soft power in India diplomacy and it is good to see such a tremendous response on the International Day of Yoga. He said, “We should be happy that we have been able to unite the world for such a noble cause.
Shri Suresh Prabhu said that only yoga can help us bring the three key elements of life, mind, body, and the soul together to make us whole. Shri Arif Mohammad Khan ji added that yoga is a holistic way of achieving the wellbeing of mind and body. He praised SPIC MACAY’s efforts for the noble cause of “Lokah Samastah Sukhino bhavantu”.

On 6th International Yoga Day, the yoga gurus sent out a message to all the participants to keep them motivated for the days to come. BK Shrinidhi ji, describing the true meaning of yoga, said “ Yoga means to connect to oneself and to the supreme and the divine and it is only when we realize that we are more than our bodies and connect to the peace and calm inside, we can bring peace to the world around us.” Sanyasi Devanand ji expressed his gratitude to SPIC MACAY for making him a part of this movement and urged the participants to make yoga a part of their lives. Ustad Wasifuddin Dagar ji talked about the Naad yoga as the direct path to do yoga sadhana and emphasized on the magical properties of Naad Yoga. He said “ While doing Naad yoga you tune yourself to the vibrations of the universe which itself is made of vibrations.
SPIC MACAY has been receiving an overwhelming positive response from thousands of teachers and students from all over the country for this endeavor. Many students from KV Dwarka, KV Koliwada, KV-1 Vijayawada, and KV Saharanpur sent their video recorded messages showcasing what they had learnt during the 5-day session and thanking SPIC MACAY for ogranizing such an event.
Young children showcasing yoga asanas

During this pandemic when everything has come to a standstill, SPIC MACAY is attempting to open this window of hope and reach out to youth and reach out to millions of students and give them an experience of our Indian cultural heritage, thereby instilling peace, positivity and resilience to overcome the current difficulties victoriously.

After a successful US debut, EdTech firm WhiteHat Jr eyes other international markets

iednewsdesk Jan 18, 2022
The EIE Investor Readiness Programme has been selected to put forward nominees for The Earthshot Prize – founded…

DDC Doda reviews progress on documentation of baseline database for…