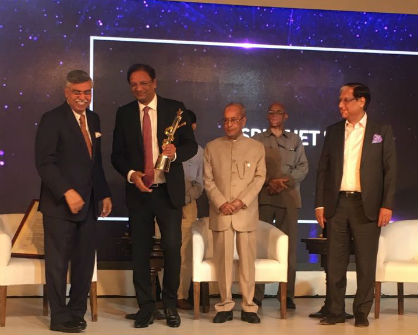 SpiceJet was awarded for exceptional innovation undertaken towards achieving enhanced customer satisfaction and operational efficiency. Focused initiatives like emphasis on consistency in service delivery and customer retention, resulted in enhanced brand loyalty, while the airline’s pursuit for operational efficiency helped it achieve a breakthrough of reducing fuel burn on every flight by 2%.

“I am honoured to receive this award. This is a recognition of SpiceJet’s spectacular comeback and remarkable performance. We have achieved what very few airlines in the world have managed and I share this award with each and every SpiceJetter who has been a part of this magnificent journey,” said Mr. Ajay Singh, CMD, SpiceJet.

SpiceJet, under the leadership of Ajay Singh, has scripted one of the most remarkable turnaround stories of recent times. From staring at an imminent closure to achieving 12 quarters of profit and a load factor of over 90% every month for 35 months in a row (a global aviation record), SpiceJet’s turnaround story has been one which probably has no parallel in the aviation world today. The SpiceJet stock has emerged as world’s best-performing aviation stock.

The first quarter of 2018 saw the airline acknowledged with lead industry titles and recognitions such as the ‘CAPA Chairman’s Order of Merit for Excellence in Indian Aviation Award’ and ‘EY Entrepreneur of the year 2017 for Business Transformation’ presented to Mr. Ajay Singh besides SpiceJet being conferred with India’s ‘Best Domestic Airline’ Award at Wings India 2018.