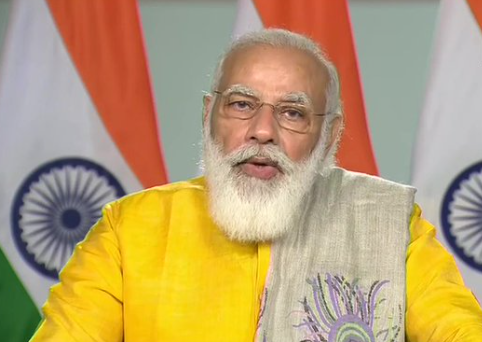 New Delhi: Prime Minister Narendra Modi’s appeal to spiritual leaders to help popularise ‘vocal for local’ for AatmNirbhar Bharat yesterday has found huge response among the prominent spiritual leaders of the country. The ‘sant samaj’ has responded to the Prime Minister’s appeal with great enthusiasm. The Spiritual personalities have come forward with public commitment to promote and popularise ‘vocal for local’ for AatmNirbhar Bharat and have pledged their support for the cause.

The Prime Minister’s call came at the unveiling of the ‘Statue of Peace’ to mark the 151st Birth Anniversary celebrations of Jainacharya Shree Vijay Vallabh Surishwer Ji Maharaj, via video conferencing, yesterday. Shri Modi had said, as the base of the freedom struggle was provided by the bhakti movement, similarly, today, basis of the AatmNirbhar Bharat will be provided by the saints, mahatma, mahants and acharyas of our country. He called on the spiritual leaders, to promote AatmNirbhar Bharat in their preaching and interactions with their followers.

Sri Sri Ravi Shankar said that in support of the Prime Minister call, youngsters in his organizations have created an app and Sri Sri reiterated the commitment to AatmNirbhar Bharat in things of day to day use.

Sentiment of support and appreciation for the call for AatmNirbhar Bharat resonates through the messages of the spiritual leaders. They are not only supporting the call on a personal level but are offering to coordinate the response of the ‘sant samaj’, calling upon their supporters to adopt the ideals of ‘vocal for local’ also they are pledging their infrastructure and resources to the cause. The unstinting support for the movement can be seen in the following messages.

iednewsdesk Jun 22, 2021
Houston’s share of homeowners is dropping, and a growing number of renters interested in buying a home find…

KU Leuven: Belgian libraries and universities raise money for the…

University of Texas at Austin: New Study on Climate Change Impacts on…

University of Warwick: Personality traits relate to being a morning or…