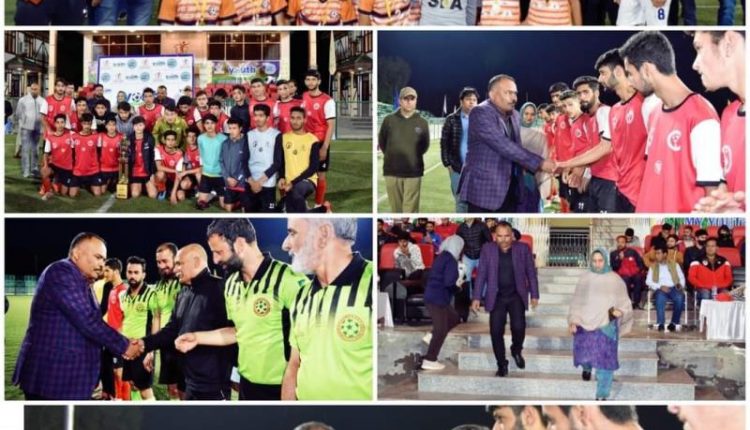 Inclement weather conditions during the past couple of days resulted in the rescheduling of cricket events however, the football matches played on the synthetic turf went ahead as scheduled.

The final match of the league played between J&K Bank and Sports Council Football lived up to all the expectations as both teams took to the field all guns blazing.

Sports Council FA stuck to their game plan and settled for a draw which meant that the effort was enough to hand them over the championship badge. It was a second straight championship title for SCFA colts this season who have been training under the watchful eyes of Javed Sofi, Football Coach J&K Sports Council.

Earlier in the evening, the penultimate match of the league between SCFA Bandipora and SCFA Baramulla went into the kitty of the latter, claiming the victory by a solitary goal. Baramulla SCFA colts by this win were placed in third place in the league.

The Divisional Commissioner Kashmir, Pandurang K Pole presided over the function as the Chief Guest. He interacted with the players before the start of the match, stayed there till the end of the final match, and gave away prizes to the participants.

While appreciating the efforts of the Sports Council he said, “conducting such activities and providing ample opportunities to the youth, enabling them to showcase their talent is a welcome step and need of the hour”. He added that Football is a widely loved sport in J&K and has a huge potential to produce many best players for the national team.

He congratulated all the teams, players, and officials for taking part in the sports activities and hoped for them to turn again for more similar events in the future.

Joint Secretary J&K Sports Council, Bashir Ahmad Bhat, Divisional Sports Officer Kashmir, Nuzhat Farooq besides many other officials from Sports Council along with other government departments were also present on the occasion.

Divulging the details of the League, Bashir Ahmad Bhat Joint Secretary, Sports Council said that 12 top teams across the valley participated in the league which featured more than 300 players and officials as well. He added that the league was played in two venues, with Gani Memorial Stadium downtown hosting 12 matches while 6 matches were played on Synthetic Turf TRC under floodlights. He said, more such football leagues shall be organized in the future.

Meanwhile, the Tennis Ball Cricket matches slated to be held in Khrew and postponed due to wet weather were played yesterday after a delayed start due to showers in the afternoon. More than 40 tennis ball cricketers participated in the event.

Despite intermittent pouring skies, a large number of spectators had reached the venue.

In the ongoing Spring, Shield T20 Tournament played in Nanil Anantnag, the second semi-final match was being played between BSM Mattan and GSM Mattan. Earlier BSM Mattan elected to bat after winning the toss. They scored 148 runs for the loss of all 10 wickets in their allotted overs. Gowhar Pathan their consistent performer once again played a vital inning of 47 runs while Ishtiyaq Rasool contributed 25 runs to the team’s total

Abid with 4 wickets leads the chart of successful bowlers for GSM Mattan in today’s game.

The second inning was in progress when the report was being filed.

The winner of today’s game will face Pahalgam Blues in the final of the Spring Shield T20 Cricket Tournament at the same venue.

These events were part of the special sports initiative conducted by the J&K Sports Council across all the districts of the union territory of J&K.

iednewsdesk May 16, 2022
Members of minority groups can boost collective action by seeking the ideas and perspectives of fellow group…

University of Exeter: Track which political parties represent your…

University of Bristol: New Festival to support survivors of childhood…