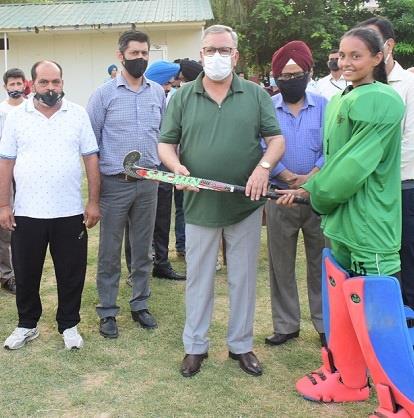 Advisor to Lieutenant Governor, Farooq Ahmad Khan, who is also the Vice President of J&K Sports Council, was the chief guest on the occasion.

Addressing the gathering, Farooq Khan lauded the performance of both Men and Women National Hockey teams who represented country in recently concluded Tokyo 2020 Olympics held in Japan and congratulated all for winning the bronze medal after a long gap of 41 years.

Advisor Farooq Khan hoped that players of J&K hockey teams will also perform with same zeal at both national and international level whenever opportunity comes up their way.

Farooq Khan also appreciated the role of Sports Council in promotion of sports in the region. “Government is committed to develop sports infrastructure in every Panchayat to provide equal opportunity to all towards harnessing their unique sports talent to the fullest”, he added.

Today’s match was played between Jammu Reds and Jammu Blues Girl teams wherein both the teams sweated out hard in the field but it was Jammu Blues who won the match.

The tournament is being organised under the supervision of Dr. Zafar Iqbal, Chief Accounts Officer, Jammu and Kashmir Sports Council and officials of the J&K Hockey Association.

The players and spectators appreciated the efforts of Jammu and Kashmir Sports Council for providing equal opportunity not only in both divisions of the union territory but equally striking the gender balance as well.

Meanwhile, hockey sticks were also distributed among the teams and vote of thanks was presented by Ashok Singh, Divisional Sports Officer Jammu.