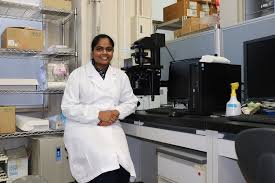 Geethika Liyanage’s first research on food science was about nutritional value of mushrooms, which she conducted during her undergraduate studies at the University of Pune (now Savitribai Phule Pune University) in India. The research made her want to study more about food and nutrition, she says. Currently in her final year as a Ph.D. student at the Graduate School of Agricultural and Life Sciences, Liyanage is conducting her last experiment to wrap up her research on diet in treating health conditions that many women suffer from. She recently won the best oral presentation award for young scientists at the Asian Congress of Nutrition 2019 held in Bali, Indonesia. “It was like a dream come true. It was one of my goals to win a young scientist award,” she said.

To Japan and UTokyo

Liyanage still remembers the amazement she felt when she first stepped into her laboratory at the Graduate School of Agricultural and Life Sciences in 2015. The Food Functionality Science Laboratory had a variety of tools and machines she had never seen before, such as high-tech microscopes and various polymerase chain reaction (PCR) machines used for amplifying, or making multiple copies of, segments of DNA.

Liyanage came to Japan in 2015 after obtaining a Japanese Ministry of Education, Culture, Sports, Science and Technology (MEXT) scholarship to study at UTokyo. Hoping to further her studies in food science somewhere overseas after completing undergraduate studies at the University of Pune in India, she looked for a scholarship program. As she did not have any specific country in mind, she applied to the first overseas program she found – the MEXT scholarship.

During roughly a yearlong screening process, she searched for a potential supervisor who works in the field of food science and found Project Associate Professor Shinji Okada at UTokyo’s Food Functionality Science Laboratory. After several email exchanges with Okada, Liyanage got the green light to join his laboratory and obtained the scholarship.

She spent the first year at the graduate school as a nondegree graduate research student, taking Japanese-language lessons and helping Okada with his research while he taught her lab techniques, including very basic things like how to hold a pipette.

After successfully passing the entrance examination, Liyanage started the master’s degree program in 2016. The first semester was tough, she says, as most of the lectures were conducted in Japanese. Having only basic Japanese-language skills, Liyanage worked hard. She sat in the very front row of lecture rooms in order to have a good view of the slides professors were showing. During the lectures, she searched for reference papers professors mentioned — as those reference papers were usually written in English, Liyanage read the abstracts to get an idea. Following the classes, she translated all the lecture notes.

“The first semester was a very stressful one, honestly,” she said. But the hard work paid off. Liyanage finished taking all the required classes by the end of the semester, enabling her to focus solely on her research from the second semester.

Research on food and a hormonal disorder

Geethika Liyanage at the Food Functionality Science Laboratory, which is currently undergoing renovation.

Throughout her master’s and doctoral degree programs, Liyanage has been studying the effects of soy isoflavone, a female hormonelike compound, in treating a hormonal disorder called polycystic ovarian syndrome (PCOS).

PCOS is one of the most common hormonal disorders among women of reproductive age, which could lead to issues such as weight gain, infertility and increase in male hormone levels. Having known many people back in Sri Lanka who suffer from those conditions, Liyanage wanted to see how food can be used to alleviate symptoms and to prevent the disorder.

“There is no permanent solution for PCOS. Although there are medications that doctors use, symptoms come back once you stop taking them. So, I wanted to see if some functional food factor or diet can be used in treating PCOS,” Liyanage said.

Although the cause of PCOS is unknown, it has been linked to things like hormonal imbalance, obesity and insulin resistance. And soy isoflavone is known to help improve these conditions.

“We’ve been studying potential treatment methods for PCOS. If we can find unique and good significant results from this, then we can move on to the next stage, which will be a clinical study. We don’t have the facility to do that, but if people, like doctors and other researchers, find this interesting, they can do the study,” she said.

Her research life can get tough, as it sometimes requires her to come to the lab every single day, including on weekends to conduct experiments. But, Liyanage says, her curiosity keeps her going.

“When you get interesting results, you want to research more and more to see how it happens and what happens next. Any researcher, I think, needs to have curiosity,” she said.

There was support not only from her supervisor but also from Keiko Abe, a UTokyo project professor who is a well-known figure in the food science industry in Japan. “Whenever I had ups and downs in my life here, she was there for me, all the time. She considered us students like her family,” Liyanage said.

Also, Liyanage now has support from her husband in Tokyo. They have been living apart from the time they got married in 2016, but he finally moved to Japan in March to join her.

Future in Japan
Liyanage is expecting to complete her Ph.D. studies and graduate in March next year. From April, she is set to start working in the research and development section of a Japanese food company based in Mie Prefecture in south central Japan.

Liyanage explained that she wants to work in Japan and apply the research knowledge she has gained to the food industry. “I know that Japanese business culture is very unique. I want to experience that, too. And see how it goes,” she added.

As for her research on PCOS, she is planning to pass her knowledge and experiences on to her fellow student who is expected to start the master’s program from April next year.

“It was just me (in my lab) who was doing this research all this time. It took me a long time to learn everything. I learned it in a hard way but I’m glad that now I can pass it on to someone so he can continue,” she said.

Traveling around the world
Liyanage has loved traveling since she was a child when her father used to take the family to places they’d never visited before. So far, she has traveled to around 15 countries in Asia, Europe and North America, such as Thailand, Germany, Italy and the United Arab Emirates. “I love exploring places I haven’t been before. We get to learn a lot about different cultures,” she said. And whenever she visits a new city, Liyanage always purchases a travel magnet. “It’s my mum who started collecting it. My husband also has the same hobby,” she laughed. Dozens of travel magnets the couple and her mother have collected over the years now decorate their refrigerator.


Traditional Sri Lankan dress
Liyanage brought her traditional Sri Lankan dress called osari with her when she moved to Japan five years ago. She has been wearing it at events, such as UTokyo’s annual May Festival, International Student’s Day of her graduate school and at the Independence Day Celebrations organized by the Sri Lankan Embassy in Tokyo where Sri Lankans living all over Japan get together every year. Along with the dress, Liyanage also brought some wall hangings from her home in Kalutara, a coastal town in southwestern Sri Lanka. “I like to keep my home pretty. I have these to decorate my home to remember my hometown,” she said.

HKU partners with Institute of Oceanology, Chinese Academy of Sciences to set up Joint Laboratory of Marine Ecology and Environmental Sciences