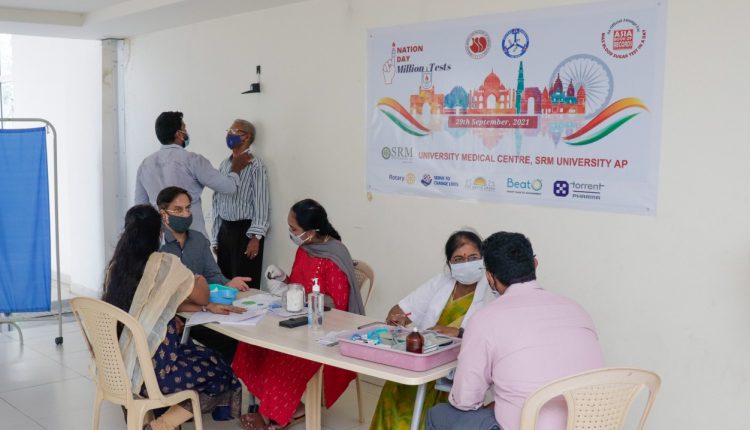 *SRM University-AP joins in One Nation, One Day, One Million Blood Sugar Tests*

SRM University-AP organised a medical camp, “One Nation, One Day, One Million Blood Sugar Tests”, to spread awareness on Diabetes on World Heart Day on September 29, 2021. The camp was conducted in collaboration with the Research Society for the Study of Diabetes in India (RSSDI).

Every year on September 29, World Heart Day is observed to raise public awareness about heart disease. One of the primary causes of death from a heart attack is diabetes. India is considered the “Diabetes Capital of the World” since it is home to an estimated 74 million diabetics. Prediabetes affects almost the same number of persons as diabetes. According to various studies, 50 percent of Indians are undiagnosed, and only 25% of those who are diagnosed are adequately regulated.

Research Society for Study of Diabetes (RSSDI) in India has attempted for the Asia Book of Records for the largest number of blood glucose testing in one single day on September 29, 2021, as a diabetes awareness drive named ONE NATION, ONE DAY, ONE MILLION TESTS. As a part of this, the medical team of SRM University-AP conducted a Diabetes screening test for all the staff, faculty and their family members from 10.00 am – 4.00 pm on the day. Dr Ch Lakshmi Rajyam, Medical Officer of the university, commenced the camp.