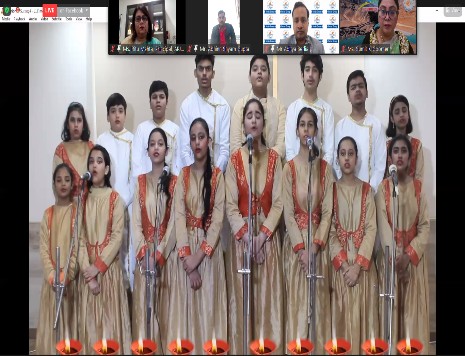 ‘Stakeholders of Apeejay – students, alumni and faculty – perceive value-based education like a badge of honour’

New Delhi : Speaking at the 47th annual appreciation day of Apeejay School Panchsheel Park, namely ‘Confluence,’ Mr. Aditya Berlia, Co-Promoter, Apeejay Stya and Svran Group, also the Co-founder, Pro Chancellor of Apeejay Stya University, said: “Stakeholders of Apeejay – students, alumni and faculty – perceive value-based education like a badge of honour.”
“But at our core, values, and character are not just the most important part but guiding principle and I think Covid-19 taught us how much that matters and how much it guides our students and our alumni,” Mr. Berlia further said.
Mr. Aditya Berlia presided over the event whereas Dr. Sourabh Garg, Chief Executive Officer, UADAI as the Chief Guest, Arjun Awardee Mr. Abhinn Shyam Gupta, National Badminton player as the Guest of Honour and School alumnus, and Indian screen actor, Ms Riddhi Dogra.
The annual extravaganza, namely ‘Confluence’, appeared as a series of creative marvels presented by the school students. The event witnessed a convergence of artistic splendour depicting the theme ‘Ek Bharat Sreshth Bharat’, invigorating dance performance depicting confluence of rivers of our country, an enriching enactment, splendour of science, instrumental music strung to Raag Yaman Kalyan, and melodious Hindi and Western school choir which struck the chords with their soul-stirring mellifluous songs and dance on Rabindra Sangeet were the major highlights of the programme.
Dr. Sourabh Garg, in his address, appreciated the efforts of the students and lauded the display of innate talent of the students of the School.
“As a student, I was nervous going to school. I am happy that issues such as corporal punishment are behind us. I would strongly advise each of the students that when you look back at my stage of life 30 years back, you realise that the causes of the nervousness seem to be tiny compared to problems that come as you grow up, but I must admit at that time, they seemed the most difficult things to surmount,” Dr. Garg said.

“Over the last two decades, we’ve made extraordinary strides in having an international curriculum, an extraordinary amount of innovation and technology being brought into our classroom along with completely new blended teaching and learning systems,” Mr. Berlia mentioned.
Mr Abhinn Shyam Gupta, Guest of Honour, encouraged students to participate in sports activities while school alumnus, Ms. Riddhi Dogra on a nostalgic trip down memory lane inspired students as a role model and set an example for school students to emulate.
School Principal, Ms. Ritu Mehta, in her annual report highlighted the astounding achievements of the School students in various fields and how the School had retained its top slot position in the field of academic rigour and co-curricular activities.
“I congratulate all my students, staff and parents on our 47th annual appreciation day. Our journey of great accomplishments and laurels are due to unflinching support, cooperation, partnership and collaborations of all stakeholders,” Ms. Mehta said.
The School felicitated students for academic achievers and meritorious students in all activities were announced.
The programme culminated with a dazzling grand finale echoing the hope for a better tomorrow. The School song living up to the School motto of ‘Soaring High is My Nature’ drew the curtain to the culmination of the function.

M3M Foundation commenced the ‘Share for Care’ 2022 initiative to distribute over 10,000 blankets and 15, 000 jackets to the construction workers, families, and children in Gurugram