Stanford economist Paul Milgrom was not prepared for the knock on his door early Monday morning from his neighbor.

Robert Wilson – Milgrom’s neighbor and former mentor – also happened to be his co-recipient for the 2020 Nobel Prize in Economic Sciences. After a short pause to take in the momentous news, Milgrom responded, “Wow, yeah. Okay.” 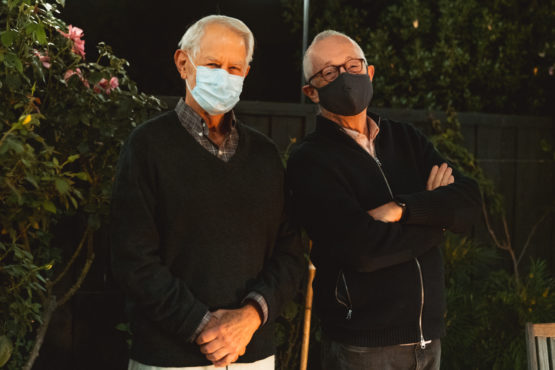 A security camera in front of Milgrom’s home in Stanford, California, recorded Wilson and his wife Mary sidling up to Milgrom’s front door in the predawn darkness and repeatedly knocking and ringing the doorbell to wake him up, as well as the ensuing exchange.

Wilson had been caught off-guard by the news just moments before – so much so that he had unplugged his home phone thinking it was an incoming spam call, prompting the Nobel committee to contact Wilson’s wife instead.

The Royal Swedish Academy of Sciences, which grants the Nobel prizes, awarded Milgrom and Wilson the $10 million Swedish kronor (about $1 million USD) prize, officially known as the “Sveriges Riksbank Prize in Economic Sciences in Memory of Alfred Nobel,” for “improvements to auction theory and inventions of new auction formats.”

“They have also used their insights to design new auction formats for goods and services that are difficult to sell in a traditional way, such as radio frequencies … Their discoveries have benefited sellers, buyers and taxpayers around the world,” said the Royal Swedish Academy of Sciences in their statement.

“Bob Wilson and Paul Milgrom’s path-breaking discoveries in auction theory opened up new possibilities in real-world transactions,” said Stanford President Marc Tessier-Lavigne. “Their insights into bidding and pricing have become integral to our modern economy. Their work is a shining example of the ways in which both fundamental discovery and its application to practical solutions make enormous contributions to modern society. All of us at Stanford are tremendously proud of their accomplishments.”

Wilson and Milgrom are internationally known for their research and teaching on auction market design, pricing, negotiations and other topics concerning industrial organization and information economics. Together and individually, the pair have played an important role in auction designs and competitive bidding strategies for the communications, oil and power industries, and in the design of innovative pricing schemes. Wilson has also influenced a generation of younger economists, including Milgrom. 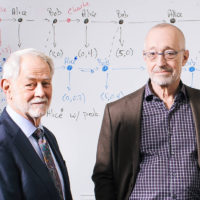 The economic science behind Wilson’s and Milgrom’s Nobel Prize

Milgrom and Wilson invented the blueprint for how many modern-day auctions function.

Wilson and Milgrom are credited with shaping the entire modern telecommunications industry, which arose from an auction format they developed, along with American economist Preston McAfee, for the 1994 radio spectrum auctions by the Federal Communications Commission (FCC). Auctions using their design have been used worldwide to allocate licenses worth more than $100 billion.

Milgrom said he was honored by the recognition of his and Wilson’s work that pushed the boundaries of their discipline and hopes the award will help pave the way for the consideration of other seemingly radical ideas.

“There are times that I have ideas and people think, ‘That’s too novel, that’s crazy, we’re not going to try that,’ ” said Milgrom, who holds the Shirley R. and Leonard W. Ely, Jr. Professorship in the School of Humanities and Sciences. “But I think that one of the effects of a prize like this is that people will pause before rejecting. They’ll take things more seriously, and that will help me make novel things happen.”

“Milgrom’s important research in the field of economics creates new knowledge and then uses that knowledge to help us better understand, and help solve, real-world problems including how to best distribute resources which are difficult to sell in a traditional way,” said Debra Satz, Vernon R. and Lysbeth Warren Anderson Dean of the School of Humanities and Sciences and Marta Sutton Weeks Professor of Ethics in Society. “In addition to being the world’s leading auction designer, along with Robert Wilson, he is also a theorist of extraordinary range across micro-economics. His work is a wonderful example of how fundamental theoretical research can have astounding practical applications.”

Wilson called the work that he and Milgrom did together “very exciting.” “I’m very happy to share this acknowledgment with him,” said Wilson, the Adams Distinguished Professor of Management, Emeritus, at the Stanford Graduate School of Business.

“Paul Migrom and Robert Wilson are giants in the field of auctions and market design,” said Jonathan Levin, the Philip H. Knight Professor and Dean of Stanford Graduate School of Business. “Their contributions stand out for their theoretical depth, and have enabled the creation and improvement of markets around the world. We celebrate their achievements and congratulate them on this eagerly-awaited and auspicious day.”

Wilson had predicted that one-third of his students would win Nobel Prizes, and Milgrom is his third student to have done so, after Alvin Roth, who is also a professor of economics at Stanford, and Bengt Holmstrom, who teaches at MIT. “I have a lot of pride about that,” Wilson said.

“Bob is now a patriarch of Nobel winners,” said Roth, who was awarded the Nobel in 2012 for his work on market design. “This is a dynasty, and this dynasty isn’t done when you think of the potential for Paul’s students and my students to have an impact.”

Roth, the Craig and Susan McCaw Professor of Economics and a senior fellow at the Stanford Institute for Economic Policy Research (SIEPR), said Milgrom and Wilson not only developed auction theory but also helped shepherd it into practice. “They didn’t just hit the ball; they ran out there and caught it,” Roth said. “They changed the way we understand auctions.”

In addition to Milgrom’s work on auction design and other areas of economics, he is well known at Stanford for his mentorship and teaching.

“Everyone knows him as a terrific adviser,” said Mark Duggan, the Trione Director of the Stanford Institute for Economic Policy Research and the Wayne and Jodi Cooperman Professor of Economics. “It’s an honor to have him as a colleague and senior fellow at SIEPR, and this win with Bob is incredibly well deserved. They have had such a tremendous impact.”

Mitch Watt, who is doing his doctoral studies under Milgrom and was also one of his research assistants, recalled a recent example of Milgrom’s commitment to his students.

He and Milgrom had been emailing back-and-forth late into the night the day before,  discussing how to best prepare for the upcoming fall quarter that will be held remotely due to the ongoing pandemic. “He emailed me, working out how to make his lecture slides the best they can be for Zoom teaching,” Watt said. “The number one thing that doesn’t come across in a Nobel Prize win is his devotion to his students. He treats his students like family.”

Watt has also been impressed by the way Milgrom assesses his students’ project proposals, which is to look for questions that are also interesting puzzles. “In economics sometimes we are naturally drawn to questions that are difficult mathematically or sophisticated but he’s never motivated by that,” Watt said. “He’s always motivated by interesting and important questions about phenomena we don’t understand in the world.”

Wilson is also described as an enthusiastic mentor by his students. “Bob is always super excited,” said Milena Wittwer, who is currently a PhD student in the Economics Department at Stanford. As a young scholar, she found that enthusiasm inspiring.

Wittwer recalls when she would discuss ideas with Wilson in his Stanford office, he would often go over to his whiteboard where he would immediately begin breaking down abstract concepts into actionable items to explore.

“Maybe I said it in a very abstract way, or maybe I wasn’t even sure what I was saying but he would make it immediately clear and transparent,” Wittwer said. “I found it astonishing to see how someone could break down these things so fast and build very concrete pictures.”

Milgrom has been at Stanford since 1987. He was the founding director of the Stanford Institute for Theoretical Economics and is director of the Program on Market Design at SIEPR, which supports research into the ways that the rules of an auction, exchange or other market affect its performance.

Born April 20, 1948, in Detroit, Milgrom earned his bachelor’s degree in mathematics at the University of Michigan in 1970, and an MS in statistics and PhD in business at Stanford in 1978 and 1979, respectively. He taught at Northwestern and Yale before arriving at Stanford. He was elected to the American Academy of Arts and Sciences in 1992 and the National Academy of Sciences in 2006, was awarded an honorary doctorate in 2001 by the Stockholm School of Economics, and is the winner of the 2008 Nemmers Prize in economics.

Although he has published many articles in the literature of economics, Wilson is best known for applying theories about auctions to real-world market problems. In the 1970s he worked with the U.S. Department of the Interior on policies for auctioning leases for oil exploration. A later innovation was an auction system for the sale of industrial chemicals. Following that, he and Milgrom engaged in their design for the 1993 FCC spectrum auction.

He joined the Stanford Graduate School of Business faculty in 1964. He served as director of Stanford’s Center on Conflict and Negotiation in 1990 and Institute of Theoretical Economics from 1993 to 1995. He was inducted into the National Academy of Sciences in 1994. Wilson also received the Stanford Business School PhD Faculty Distinguished Teaching Award in 2001 and was named a Distinguished Fellow of the American Economic Association in 2006.

In 2018, Milgrom and Wilson were jointly awarded the 2018 John J. Carty Award for the Advancement of Science with David M. Kreps.

Milgrom and Wilson are the 18th and 19th living Nobel laureates among Stanford’s community of scholars. Wilson is the fourth Stanford Graduate School of Business faculty member to win the Nobel. The School’s former Dean Michael Spence was honored in 2001 for his contributions to the analysis of markets with asymmetric information. Myron Scholes was honored in 1997 for developing a new method of determining the value of financial derivatives. William Sharpe received the prize in 1990 for his contributions to the theory of financial economics.

Students from Jasudben ML School visit the National Association for the Blind;…

Online Conference on Role of Counselling

CME at Department of Amraz-e-Niswan-wa-Atfal