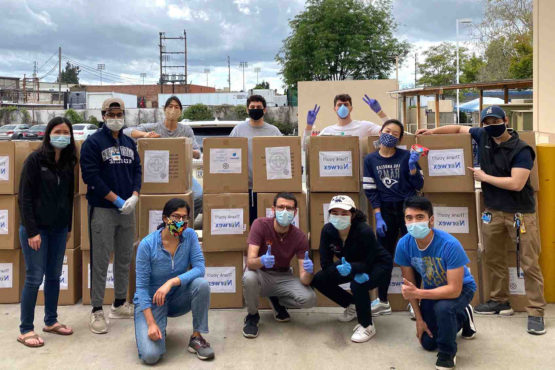 After a long path to medical school, Joshua Swee wasn’t about to stand idly by and watch his fellow medical professionals struggle during the COVID-19 crisis. With help from colleagues, Swee has co-founded a large charitable organization that’s supporting workers on the front lines of the pandemic.

What started as a small, grassroots effort has since grown into a much larger operation that is collecting, distributing and donating personal protective equipment and raising funds for medical workers across the nation.

“When the pandemic started, we were learning about how PPE shortages were affecting workers, and we wanted to see what we could do to help,” Swee said.

In mid-March, medical rotations were canceled, leaving students like Swee unable to use their medical training in an official capacity to help fight the pandemic. So Swee got involved in medical equipment donation drives at Stanford and the University of California, San Francisco, where he met other medical professionals. Together, they created donateppe.org as a simple way to promote the drives and direct the public to donation sites.

“It grew pretty quickly from there,” Swee said. “And as we gained momentum, our responsibilities quickly expanded.”

Building an organization
Within weeks of launching DonatePPE, hospitals facing equipment shortages began contacting Swee and his fellow organizers to request equipment. Then companies started reaching out to express interest in making donations. To handle the increase in equipment that was being donated, Swee and his colleagues established a distribution network that included partnerships with nationwide freight companies that offered them discounted rates for transporting donations.

“We also have warehouse space now,” Swee said. “Some of it has been donated to us and some of it we’ve secured using donations.”

In just a few short months, DonatePPE has grown into a massive charitable effort across numerous states. To date, the organization has distributed more than 1.5 million donated pieces of personal protective equipment, including at least 1.25 million masks, 150,000 face shields, and 15,000 isolation gowns. It has also donated items such as intubation kits, respirators and “bunny” suits, and raised over $150,000, which they’ve invested back into purchasing PPE to donate to medical workers and facilities that need them.

DonatePPE also provides a host of other supportive services. The organization has created databases that catalog the locations nationwide where PPE is needed, set up a GoFundMe page to benefit hospitals and healthcare workers, connected the general public to volunteer opportunities, and helped other charitable organizations with their distribution efforts. The group has even partnered with author and cartoonist Guy Gilchrist – known for his work with The Muppets – on an interactive art project to support frontline healthcare workers and patients.

As chief technology officer, Swee oversees DonatePPE’s infrastructure. He said that the biggest challenge for the organization has been bringing it to scale, leading him and his colleagues to automate much of the operation, including an online system for hospitals to report their needs and donors to track their donations.

“My background is in computer science and I’m currently training in medicine at Stanford, so I’ve been able to leverage both of these skill sets,” he said.

Passion project
Swee’s path to a medical career hasn’t been conventional. Born in Singapore and raised in Malaysia, he initially completed his undergraduate studies in computer science in Australia. After relocating to the United States to work as a software engineer, Swee decided to pivot to a medical career. But when his undergraduate degree didn’t satisfy medical school requirements in the U.S., he had to return to school, eventually completing an additional 120-credit bachelor’s degree in cell biology and neuroscience at Rutgers University while also working full-time. Doing so wasn’t easy, but Swee said his reasons for pursuing medicine are personal.

“I come from a medically underserved community and I really want to serve the kind of communities like my hometown,” he said. “And the sacrifices I had to make to go into medicine seemed worth it.”

Swee acknowledges that being a full-time medical student and leading DonatePPE is difficult. But he says he wouldn’t have it any other way.

Now in his third year at Stanford Medicine, Swee hopes his medical training will lead to a career serving the healthcare needs of smaller communities that need help the most. Until then, he’s focused on his studies and continuing to lead DonatePPE’s growing operation. Swee and the other leaders of DonatePPE hope to expand the organization beyond the states as long as the pandemic continues.