It sounds like alchemy: take a clump of white dust, squeeze it in a diamond-studded pressure chamber, then blast it with a laser. Open the chamber and find a new microscopic speck of pure diamond inside. 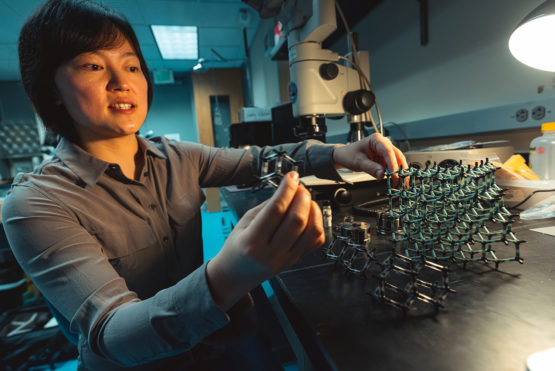 Yu Lin shows models of diamondoids with one, two and three cages, which can transform into the intricate, pure-carbon lattice of diamond – seen in the larger, blue model at right – when subjected to extreme heat and pressure. (Image credit: Andrew Brodhead)

A new study from Stanford University and SLAC National Accelerator Laboratory reveals how, with careful tuning of heat and pressure, that recipe can produce diamonds from a type of hydrogen and carbon molecule found in crude oil and natural gas.

“What’s exciting about this paper is it shows a way of cheating the thermodynamics of what’s typically required for diamond formation,” said Stanford geologist Rodney Ewing, a co-author on the paper, published Feb. 21 in the journal Science Advances.

Scientists have synthesized diamonds from other materials for more than 60 years, but the transformation typically requires inordinate amounts of energy, time or the addition of a catalyst – often a metal – that tends to diminish the quality of the final product. “We wanted to see just a clean system, in which a single substance transforms into pure diamond – without a catalyst,” said the study’s lead author, Sulgiye Park, a postdoctoral research fellow at Stanford’s School of Earth, Energy & Environmental Sciences (Stanford Earth).

“If you can make even small amounts of this pure diamond, then you can dope it in controlled ways for specific applications,” said study senior author Yu Lin, a staff scientist in the Stanford Institute for Materials and Energy Sciences (SIMES) at SLAC National Accelerator Laboratory.

Natural diamonds crystallize from carbon hundreds of miles beneath Earth’s surface, where temperatures reach thousands of degrees Fahrenheit. Most natural diamonds unearthed to date rocketed upward in volcanic eruptions millions of years ago, carrying ancient minerals from Earth’s deep interior with them.

As a result, diamonds can provide insight into the conditions and materials that exist in the planet’s interior. “Diamonds are vessels for bringing back samples from the deepest parts of the Earth,” said Stanford mineral physicist Wendy Mao, who leads the lab where Park performed most of the study’s experiments.

To synthesize diamonds, the research team began with three types of powder refined from tankers full of petroleum. “It’s a tiny amount,” said Mao. “We use a needle to pick up a little bit to get it under a microscope for our experiments.”

At a glance, the odorless, slightly sticky powders resemble rock salt. But a trained eye peering through a powerful microscope can distinguish atoms arranged in the same spatial pattern as the atoms that make up diamond crystal. It’s as if the intricate lattice of diamond had been chopped up into smaller units composed of one, two or three cages.

Unlike diamond, which is pure carbon, the powders – known as diamondoids – also contain hydrogen. “Starting with these building blocks,” Mao said, “you can make diamond more quickly and easily, and you can also learn about the process in a more complete, thoughtful way than if you just mimic the high pressure and high temperature found in the part of the Earth where diamond forms naturally.”

The researchers loaded the diamondoid samples into a plum-sized pressure chamber called a diamond anvil cell, which presses the powder between two polished diamonds. With just a simple hand turn of a screw, the device can create the kind of pressure you might find at the center of the Earth.

Next, they heated the samples with a laser, examined the results with a battery of tests, and ran computer models to help explain how the transformation had unfolded. “A fundamental question we tried to answer is whether the structure or number of cages affects how diamondoids transform into diamond,” Lin said. They found that the three-cage diamondoid, called triamantane, can reorganize itself into diamond with surprisingly little energy.

At 900 Kelvin – which is roughly 1160 degrees Fahrenheit, or the temperature of red-hot lava – and 20 gigapascals, a pressure hundreds of thousands of times greater than Earth’s atmosphere, triamantane’s carbon atoms snap into alignment and its hydrogen scatters or falls away.

The transformation unfolds in the slimmest fractions of a second. It’s also direct: the atoms do not pass through another form of carbon, such as graphite, on their way to making diamond.

The minute sample size inside a diamond anvil cell makes this approach impractical for synthesizing much more than the specks of diamond that the Stanford team produced in the lab, Mao said. “But now we know a little bit more about the keys to making pure diamonds.”

Wendy Mao is Professor of Geological Sciences and of Photon Science. Rodney Ewing is the Frank Stanton Professor in Nuclear Security and a Senior Fellow at the Freeman Spogli Institute for International Studies and at the Precourt Institute for Energy.

Other co-authors are affiliated with the Center for High Pressure Science and Technology Advanced Research in Beijing, China, and the Center for Advanced Radiation Sources at the University of Chicago.

The research was funded by the U.S. Department of Energy.

iednewsdesk Jun 17, 2022
Researchers from the University of Cambridge and Harvard University have developed a method to dramatically…

Loughborough University: Researchers to quiz astronauts about their…