The way we measure economic health is flawed, according to new research from the Stanford-based Natural Capital Project. When we talk about a country’s economic prosperity, we’re almost always referring to gross domestic product, or GDP, a calculated value based on the goods and services that flow through an economy. But GDP doesn’t account for many of the benefits that people and economies receive from nature, like clean water and climate security. 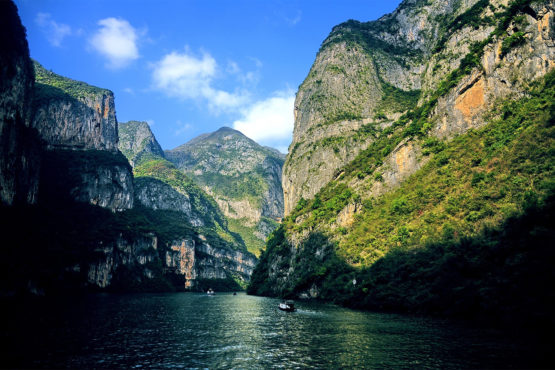 The research team conducted a GEP pilot study in Qinghai province, the source of the Mekong, Yangtze (pictured) and Yellow rivers. Qinghai province provides a critical water supply to wealthy provinces downstream but receives no credit for this natural capital in the traditional GDP equation. (Image credit: 中彭/Pixabay)

To address this economic gap, Stanford researchers developed a new metric for measuring the value of nature’s contributions to economic activity. Their study, published in Proceedings of the National Academy of Sciences, details how the approach, known as Gross Ecosystem Product (GEP) is being successfully implemented in China.

“We’re basically flying blind when it comes to knowing where and how much nature to protect,” said the study’s senior author Gretchen Daily, a professor of environmental science at Stanford’s School of Humanities and Sciences.

“GEP tracks the vital contributions of nature to society, informs investments in securing them and helps evaluate the performance of leaders and policies,” added Daily, who is also the faculty director of the Natural Capital Project, an interdisciplinary partnership that helps governments and organizations integrate the values of nature’s contributions into economic and development plans.

The researchers used InVEST, the Natural Capital Project’s open-source mapping and modeling software, to calculate the flow of benefits that nature provides to people and inform the GEP equation. GEP is calculated in parallel ways to GDP, accounting for and aggregating all of nature’s contributions to people in a single, monetary metric. These contributions provide a new lens with which to assess income and performance.

“Over the past 50 years, global GDP has risen by 370 percent,” said co-author Stephen Polasky, professor of ecological and environmental economics at the University of Minnesota. “Alongside global economic prosperity, we’re seeing the degradation of the vital natural capital that fundamentally underpins human well-being.”

University of Bristol: New insight in patient response to…

The Chinese Academy of Sciences has pioneered the concept of GEP and compiled a wealth of environmental data to do the calculations. Led by Zhiyun Ouyang, director of the academy’s Research Center for Eco-Environmental Sciences and lead author on the study, the research team used Qinghai province in China as a testing ground for the new measure. Qinghai province is known as the “water tower of Asia” because it sits at the source of the Mekong, Yangtze and Yellow rivers, which provide water to much of China and other Southeast Asian countries.

“Qinghai is rich in natural capital, but its GDP alone does not reflect that value,” Ouyang said. “Using this new metric, we were able to place a value on important ecosystem services, especially water supply, that Qinghai currently exports to other provinces but receives no credit for in the GDP calculation.”

The people downstream who benefit from Qinghai’s water supply tend to live in provinces wealthier in GDP and, in urban areas, often poorer in GEP. Using GEP, leaders in China are informing “eco-compensation” programs that enable downstream water users to pay for the protection of the water source upstream. These types of programs can help alleviate poverty while keeping critical ecosystem benefits flowing.

The researchers are also thinking about how the new measure could be linked to policy. “GEP by itself is just a metric, a number. But when used to inform and drive policies, it can be a powerful new tool for changing the ways we understand and value nature globally,” said Mary Ruckelshaus, managing director of the Natural Capital Project. “Being held accountable for reporting GEP may incentivize governments to make decisions that protect the natural resources on which we all depend.”

Like the payment for the water eco-compensation program in China, other countries and governments have been implementing schemes to allow payment for the provision and protection of ecosystem services for decades. But policy development can be slow and burdensome, especially without a standardized measurement or approach. GEP will enable governments to more easily compare options and weigh tradeoffs between different conservation decisions.

The ultimate goal is to see the successes of its application in China applied globally so that economies everywhere track and secure the values of nature to society. The researchers are working with the United Nations Statistics Division to develop ways to scale and standardize GEP as a global reporting metric.

“We see a potential future where GEP is reported alongside GDP in all economies,” said Daily. “The use of GEP yielding tangible results already – creating jobs and restoring critical ecosystems. Securing natural capital is at the heart of a future in which all of us can thrive.”

Gretchen Daily is also Bing Professor of Environmental Science in the Stanford School of Humanities and Sciences and a senior fellow in the Stanford Woods Institute for the Environment. Co-author Changsu Song was a visiting scholar at the Stanford Natural Capital Project from the Chinese Academy of Sciences.

University of Bristol: New insight in patient response to surgical disruption in…

University of Bristol: New insight in patient response to surgical disruption in…