The rapid, low-cost technique is the first to analyze DNA left behind in animals’ feces to map out complex networks of species interactions in a terrestrial system. It could help redefine conservation as we know it, identify otherwise hard-to-find species and guide a global effort to rewild vast areas. Watch the video here.

When wolves returned to Yellowstone in 1995, no one imagined the predators would literally change the course of rivers in the national park through cascading effects on other animals and plants. Now, a Stanford University-developed approach holds the promise of forecasting such ecosystem changes as certain species become more prevalent or vanish altogether. 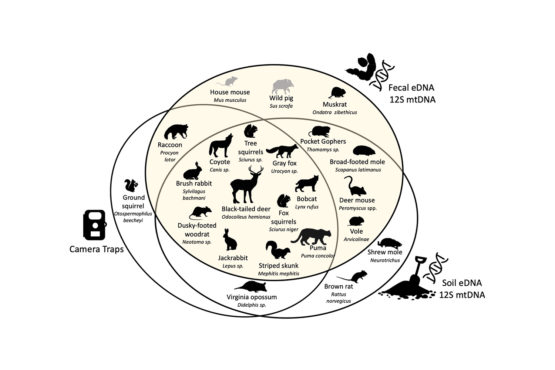 Outlined in Frontiers in Ecology and Evolution, the rapid, low-cost technique is the first to analyze DNA left behind in animals’ feces to map out complex networks of species interactions in a terrestrial system. It could help redefine conservation as we know it, identify otherwise hard-to-find species and guide a global effort to rewild vast areas through the reintroduction of locally extirpated species.

“It’s not just that we can rapidly capture the biodiversity of an area,” said study lead author Jordana Meyer, a biology PhD candidate in the Stanford School of Humanities and Sciences. “We can also quantify the extent of indirect links among species, such as how a specific predator’s behavior affects vegetation in an area. This allows us to measure impacts on species that are essential to the system or particularly vulnerable.”

Just as the introduction of species, such as Yellowstone’s wolves, can have widespread effects, their disappearance can be devastating in ways that are hard for scientists to predict. Meyer, whose work focuses primarily on African wildlife, has seen the impact first-hand in the Democratic Republic of Congo. There, the loss of large herbivores, such as rhinos and elephants, has led to the shrinking of once-massive grassland savannahs the creatures once grazed.

As human impacts on wild places accelerate, effective conservation and ecosystem management will require more rapid, inexpensive and non-invasive technologies for capturing changes in biodiversity and quantifying species interactions. One of the most promising tools is the study of so-called environmental DNA in left-behind animal materials, such as hair and skin. After extracting the DNA, scientists sequence and compare it to online databases to identify the organisms present in a certain area. It’s a relatively fast, low-maintenance process compared to traditional approaches, such as live-trapping, animal-tracking and camera trapping.

Working at Stanford’s 1,193-acre Jasper Ridge Biological Preserve, the researchers used their technique to analyze feces from carnivores such as mountain lions, omnivores such as gray foxes and herbivores such as black-tailed deer. By identifying the DNA in the diets of these animals, the researchers constructed an extraordinarily detailed, data-rich food web and accurately captured the biodiversity of the area when compared against other animal surveys and a long-term camera trap study in the preserve.

Among other surprises, the new analysis revealed the indirect effects of a predator cascade on vegetation and allowed the researchers to determine exactly how predators competed with each other. These results were validated against evidence from camera trap data gathered at Jasper Ridge over the past seven years in which the return of mountain lions, the ecosystem’s top predator, caused a decline in deer and coyote occurrence. Without its coyote competitor, the formerly rare gray fox returned to Jasper Ridge. Gray foxes subsist more on plants, namely fruits and seeds, than do coyotes. Thus, the rise in gray foxes can lead to alterations in the distribution and abundance of fruit plants at the preserve because seeds often remain viable after being digested by mammals. Armed with this type of knowledge, managers can predict the impacts of shifting animal and plant communities, which can, in turn, provide a framework for conservation-relevant decisions.

The DNA the researchers collected in animal feces also identified plant and animal species not known to occur within the preserve, providing an early warning of invasive species.

“We are excited about this approach because it will not only help us to understand how and why species survive in protected areas based on what they eat, but also whether animals are able to capitalize on non-native plant and animal species,” said study senior author Elizabeth Hadly, the Paul S. and Billie Achilles Professor in Environmental Biology in Stanford’s School of Humanities and Sciences. Hadly’s lab has pioneered work with left-behind and ancient DNA in the U.S., South America and India.

These methods could aid in rewilding protected areas by allowing researchers to model how ecosystems will respond to certain species before they are actually reintroduced. For example, before reintroducing the African lion to protected parts of Africa, scientists could first study the biodiversity and connectivity of the areas and predict how the lions could impact prey populations and other knock-on effects they might trigger throughout the entire ecosystem.

The researchers plan to scale-up their model across protected areas in Africa to assist in strategic adaptive management and rewilding strategies. “I am hopeful that techniques like this can help us secure and monitor natural spaces on a global scale,” Meyer said.

Hadly is also a faculty director of Stanford’s Jasper Ridge Biological Preserve, a member of Stanford Bio-X and a senior fellow at the Stanford Woods Institute for the Environment. Co-authors of the study include Kevin Leempoel and Gianalberto Losapio, biology postdoctoral research fellows at Stanford at the time of the research.

The research was funded by Stanford’s Philippe S. Cohen Graduate Fellowship Fund and JRBP Mellon Grant, as well as the Swiss National Science Foundation and the Howard Hughes Medical Institute.