Supercomputer simulations of planetary-scale interactions show how ocean storms and the structure of Earth’s upper layers together generate much of the world’s seismic waves. Decoding the faint but ubiquitous vibrations known as Love waves could yield insights about Earth’s storm history, changing climate and interior.

Carbon neutral ‘spaceplane’ parts to be…

Vibrations travel through our planet in waves, like chords ringing out from a strummed guitar. Earthquakes, volcanoes and the bustle of human activity excite some of these seismic waves. Many more reverberate from wind-driven ocean storms. 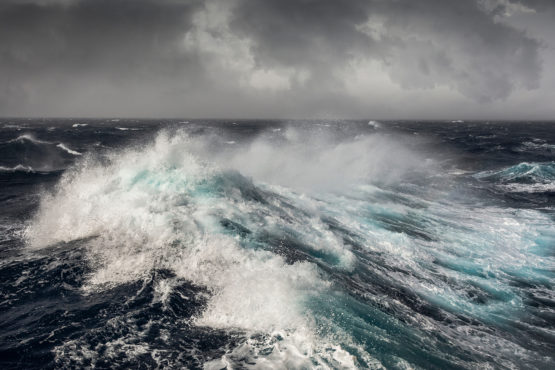 When wind-whipped ocean waves send piston-like thumps of pressure down to the seafloor, the patchwork structure of the solid Earth below answers with a thrum all its own. (Image credit: Andrey Polivanov / Shutterstock)

As storms churn the world’s seas, wind-whipped waves at the surface interact in a unique way that produces piston-like thumps of pressure on the seafloor, generating a stream of faint tremors that undulate through Earth to every corner of the globe.

“There is an imprint of those three Earth systems in this ambient seismic data: atmosphere, Earth’s rocky outer layers and ocean,” said Stanford University geophysicist Lucia Gualtieri, lead author of a paper in Proceedings of the National Academy of Sciences that helps to resolve a decades-old conundrum over the physics of seismic waves related to ocean storms.

Known as secondary microseisms, the small seismic waves excited by rumbling oceans are so ubiquitous and chaotic that seismologists have long set the data aside. “When you record these waves, the seismic record looks like random noise because there are so many sources, one close to the other across the extended area of a storm. They’re all acting at the same time, and the resulting wavefields interfere with each other,” Gualtieri said. “You want to just discard it.”

Yet over the last 15 years, researchers have found a way to extract meaning from this noisy data. By analyzing how quickly pairs of waves travel from one seismic station to another, they have begun to glean insights about the materials they’re moving through. “We use seismic waves like X-rays in medical imaging for scanning the Earth,” said Gualtieri, who is an assistant professor of geophysics in Stanford’s School of Earth, Energy & Environmental Sciences (Stanford Earth).

Love waves from the ocean floor

Unlike a single ocean wave rolling across the surface, which dies out before it reaches the deep sea, the chaotic interactions of waves traveling in opposite directions during a storm can create an up-and-down bobbing motion at the surface that pulses all the way to the solid Earth below. Vibrations known as Rayleigh waves then travel outward from the pulse, moving the ground up and down as they go.

For decades, scientists have understood the vertical component of ocean-storm microseisms, where Rayleigh waves dominate. But there is another set of vibrations recorded during ocean storms that are inexplicable in the accepted theories for how stormy seas generate movements in the solid Earth. These vibrations, named Love waves after their 20th-century discoverer, jostle underground rock particles side to side – perpendicular to their path forward – like a slithering snake. “These waves shouldn’t be there at all,” Gualtieri said. “We didn’t know where they were coming from.”

Scientists have presented two plausible explanations. One idea is that when the vertical force pumping down from colliding ocean waves encounters a slope on the seafloor, it splits and forms the two different surface wave types: Rayleigh and Love. “In that case, the source of Love waves would be very close to the source of Rayleigh waves, if not the same location,” Gualtieri said.

But Gualtieri’s research, co-authored with geoscientists from Princeton University, finds the slopes and inclines of the seafloor are not steep enough to generate the strong horizontal force necessary to produce the Love waves picked up by seismic recorders. Their results, published Nov. 9, support an alternative theory, in which Love waves originate within the Earth itself. It turns out that when windswept seas throttle pressure down to the seafloor, the patchwork structure of the solid Earth underneath answers with a thrum all its own.

“We understand how earthquakes create Love waves, but we’ve never exactly figured out how ocean waves create them,” said ambient seismic noise expert Keith Koper, a professor of geology and geophysics and director of seismograph stations at the University of Utah, who was not involved with the study. “This is a little embarrassing because ocean-generated Love waves have been observed for over 50 years.” The paper led by Gualtieri, he said, “provides conclusive evidence” for how ocean waves generate this particular kind of vibration in the Earth.

Using the Summit supercomputer at Oak Ridge National Laboratory, the researchers simulated the complex interactions that occur between storms, ocean waves and the solid Earth over three-hour periods. Accurate down to four seconds, each simulation included 230,400 pressure sources scattered across the entire globe. “We’re using the computer as a lab, to let seismic waves propagate from realistic sources all over the world’s oceans based on known physics about how and where seismic waves are generated by ocean storms, as well as how they move through the Earth,” Gualtieri said.

One version of the model Earth represented the planet as a simplistic stratified world, where properties vary only with depth, like a layer cake. The other, more true-to-life model captured more of the three-dimensional variation in its underground terrain, like a chocolate chip cookie. For each version, the researchers switched underwater depth data on and off to test whether seafloor features like canyons, ravines and mountains – as opposed to the deeper structure – could produce Love waves.

The results show that Love waves are poorly generated in the layer-cake-like, one-dimensional Earth. Given about 30 minutes and a rumbling ocean, however, Love waves emanated from below the seafloor in the three-dimensional model. When Rayleigh waves and other seismic waves generated by ocean storms encounter hotter or cooler zones and different materials in their lateral journey through Earth, the study suggests their energy scatters and refocuses. In the process, a portion of the wavefield converts to Love waves. “If you apply those pressure sources from interfering ocean waves and you wait, the Earth will give you the entire wavefield,” Gualtieri said. “It’s the Earth itself that will generate the Love waves.”

According to Gualtieri, better understanding of how these vibrations arise and propagate through Earth could help to fill in gaps in knowledge of not only our planet’s interior but also its changing climate. Analog seismic recordings date back to before the satellite era, and high-quality digital data has been logged for several decades.

“This database holds information about environmental processes, and it’s virtually untapped,” she said.

Carbon neutral ‘spaceplane’ parts to be manufactured at Sydney