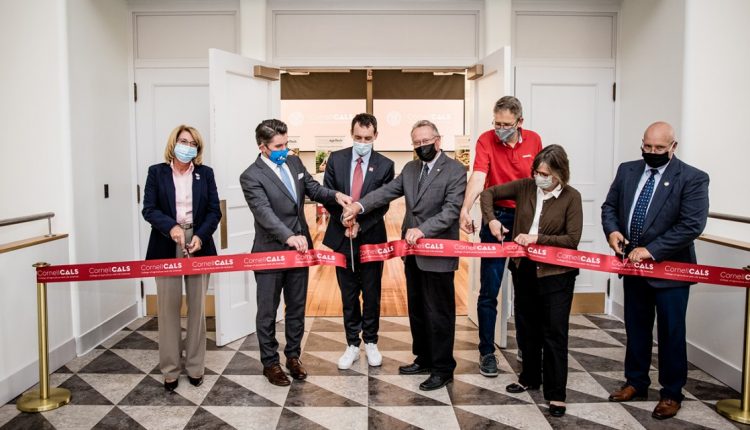 State and university leaders gathered for a ribbon cutting Sept. 9 to celebrate the $3.5 million renovation of Jordan Hall on the Cornell AgriTech campus in Geneva

State and university leaders gathered for a ribbon cutting Sept. 9 to celebrate the $3.5 million renovation of Jordan Hall on the Cornell AgriTech campus in Geneva – a new space that will enable Cornell AgriTech to better serve the educational needs of the farm, food and beverage industries in New York state, via both in-person and distance learning.

Cornell AgriTech – established in 1880 as the New York State Agricultural Experiment Station – has driven economic development, pushed scientific discovery and provided practical solutions for farmers and businesses in New York and around the world for more than 130 years. It is home to multiple programs dedicated to food research and entrepreneurialism, product commercialization and craft beverage development, including the Cornell Food Venture Center, the New York State Center of Excellence for Food and Agriculture, the USDA’s Plant Genetics Resource Unit and the Cornell Craft Beverage Institute.

As Cornell AgriTech grew these and other programs over the past decade, industry demand for Cornell’s educational opportunities grew even faster, said Ben Houlton, the Ronald P. Lynch Dean of the College of Agriculture and Life Sciences (CALS).

“And, thus, a great idea was born: What if we build on that success and reshape the existing capacities at Cornell AgriTech to expand our reach through new technologies? Then the sky is the limit with the ways Cornell can diversify the modes of educational opportunities for busy professionals,” Houlton said. “We have added important digital technologies to help facilitate all methods of distance learning, sending science-based learning out into the community as well as beaming in experts and professionals from the field into our sessions here at Cornell AgriTech.”

“$3.5 million dollars to revitalize Jordan Hall at Cornell AgriTech is a small investment, but what it leverages for New York state farmers and food entrepreneurs is incalculable,” Malatras said. “The commercialization, development and promotion of locally produced food is needed now more than ever and what better way than to have SUNY students and faculty be a major part of it within a space they can be proud of. I congratulate everyone involved in making this revitalized facility a reality.”

Commissioner Ball spoke to Cornell AgriTech’s growing legacy as a center of innovation, research and entrepreneurship.

“I’m proud that New York state funding supported this important project, which will allow for greater support of our farms and food businesses, providing the research and education they need to succeed. I look forward to seeing what comes next for AgriTech,” Ball said.

“Jordan Hall’s renovation is a true testament to the dedication of everyone at Cornell, and I am excited to see the new opportunities this investment from New York will provide to our local agricultural economy,” Gallahan said.

State Senator Pamela Helming said one of the first projects for which she advocated as a state senator was the establishment of the New York State Center of Excellence for Food and Agriculture at the Geneva campus.

“Cornell AgriTech is a key reason why New York state ranks in the top five in the nation in the number of wineries, breweries, distilleries and cideries, and why our farmers and growers produce the best crops in the world,” Helming said. “Jordan Hall opens another phenomenal resource to farm, food and beverage entrepreneurs, and will ultimately support further business and job growth in the Finger Lakes, the Grow-NY region and New York state.”

Assemblymember Donna Lupardo, chair of the Assembly Agriculture Committee, said the new resources can strengthen partnerships between researchers, farmers and entrepreneurs who are working to create economic opportunities.

“There is enormous potential within New York’s food and agricultural community, Lupardo said. “The renovations made at the Cornell AgriTech campus and Jordan Hall will certainly help New York tap into that potential.”

Roughly 8,000 square feet of meeting, classroom and mechanical space in Jordan Hall was renovated. In addition to the installation of new digital technologies, the renovation also included upgrades for fire safety, disability accommodation and ventilation. The renovations were made possible with support from the State University Construction Fund, the Dormitory Authority of the State of New York and Cornell CALS.

Cornell researchers and students are poised to help shed light on the history of St. James A.M.E. Zion Church

Utrecht University: No signal function for histidine in mammalian…