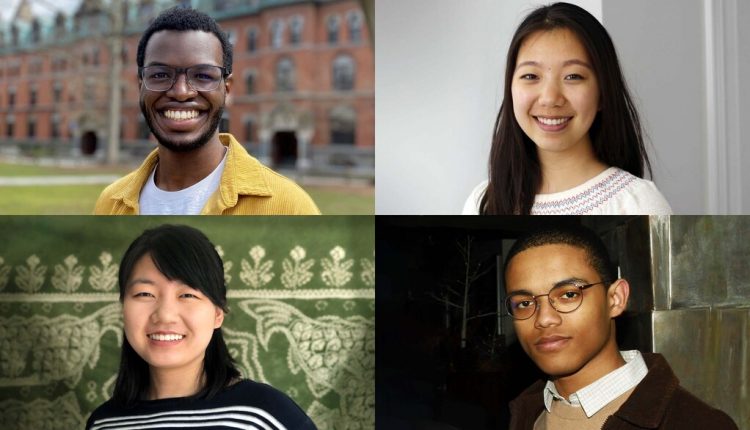 Four Yale College juniors — Daniel Chabeda, Megan He, Ronald Hood, and Sarah Zhao — are among the 410 college students from across the nation to receive Goldwater Scholarships for the 2021-2022 academic year. The scholarships, named in honor of the late U.S. Sen. Barry Goldwater, encourage outstanding students to pursue research careers in the fields of the natural sciences, engineering, and mathematics.

Scholarship winners have impressive academic and research credentials. Many have published their research in leading professional journals and have presented their work at professional society conferences.

The Yale winners were chosen from over 5,000 college sophomores and juniors who were nominated by 438 academic institutions. Virtually all of the Goldwater Scholars intend to obtain a Ph.D. degree. Fifty-one are mathematics and computer science majors, 291 are majoring in the natural sciences, and 68 are majoring in engineering.

“The members of the campus Goldwater committee were very enthusiastic in their support of these exceptional students and were delighted that the students received this well-deserved recognition from the Goldwater Foundation,” said Emma Rose, associate director of fellowships in the Office of Fellowship Programs in the Center for International and Professional Experience.

Daniel Chabeda, who is majoring in chemistry, conducts research in carbon-neutral fuel production and plans to pursue a Ph.D. in theoretical chemistry. He has been active in the religious organization Christian Union Lux, the Yale Symphony Orchestra, First-Year Outdoor Orientation Trips, and in the Chaplain’s Office. He is also a peer tutor for the undergraduate course “Chemistry of Food and Cooking.”

Megan He is double majoring in environmental engineering and global affairs, and plans to pursue a Ph.D. in environmental engineering. She has conducted research on emissions of organic compounds, atmospheric chemistry, and air quality. She is an engineering tour guide and STEM representative in the Undergraduate Admissions Office, and works as a peer tutor in the physics department. She is also active in the Yale Program on Climate Change Communication and Yale Scientific Magazine.

Ronald Hood is majoring in molecular biophysics and biochemistry with a certificate in data science. He researches protein-protein electron transfer and dissimilatory metal reduction in electrogenic bacteria. He is the incoming president of the Ivy League Space Coalition, a hardware specialist and queue coordinator of Yale’s Student Technology Collaborative, and serves as a mentor for the nonprofit volunteer mentoring program You Can Too for minority youth. Hood is the founder and data scientist of an intercollegiate team that develops smart contracts that arbitrage synthetic assets on EVM and Solana. He plans to pursue a Ph.D. in biophysics.

Yale researchers dig into EHR use data – and gender differences