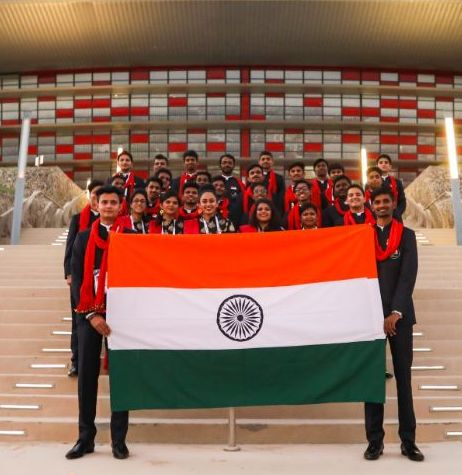 New Delhi: India’s 77 strong member contingent, marched their way out to the middle and were cheered aggressively by the capacity crowd at the 44th WorldSkills Competition grand Opening Ceremony which was held on Saturday, 14th October, 2017 at du Arena, Abu Dhabi.

The men wore blue blazer trouser combination and finished the look with a red stole around their neck while the women participants were beautifully dressed in traditional Indian sarees. It is for the is the first time that the WorldSkills International Competition which is the Olympics of Skills is held in the Middle East and the North Africa (MENA) region.

The spectacular ceremony witnessed thousands of competitors, officials, and guests who were gathered together to watch the Parade of Nations. The official start of the competition began with the Parade of Nations – including 60 plus countries and regions represented by more than 1300+ competitors with their country flags flying and heads held high- demonstrating their joy and delight in representing their country at a global stage. Close to 1300 Competitors, 10,000 international visitors, and 100,000 visitors from UAE are expected to attend, with around 80,000 UAE students registered to visit the event. The night featured grandeur performances presenting the best of the culture, heritage and art of the Middle East.

Another highlight at the event was that the India’s Ambassador to the UAE Navdeep Suri inaugurated the very unique India Pavilion today at Olympic of Skills, which is this time built in an architectural style resembling the Taj Mahal – an embodiment of genuine architectural skills. The pavilion saw many from the India’s diaspora interacting on options to invest in India, hiring from India and advisory services in skills.

Congratulating the team on their participation in WorldSkills, Mr Suri said, “Events like the WorldSkills provide us with the opportunity to learn and imbibe the best practices across skill sets and network with skill providers across the world. With participation from so many countries, we have the opportunity to showcase our skills in multiple areas by some leading exponents from India. I wish them all the best in their participation over the next three days and I look forward to meet, engage and learn from them during the course of the event.”
Addressing the gathering at the opening ceremony, the WorldSkills President Simon Bartley began by thanking the hosts, organizers, sponsors, and partners. He wished the competitors good luck and told them that this competition is just the start of many great things they will do in life and that each competitor at the global platform is already a WorldSkills Champion and a master in his skill set.

Wishing the candidates for WorldSkills 2017, Minister for Skill Development and Entrepreneurship, Shri Dharmendra Pradhan said, “Our good wishes to all the competitors who will be showcasing their best of skills in the next four days. It is sheer dedication and efforts of these competitors that has helped them in representing their countries in various skills at a global platform. We are proud of our team of 28 competitors who will be taking up the challenge against the competitors from other countries. We are sure that they will win laurels for our country and make India proud. They are already champions for us in India and will inspire many to hone a skill and add to their personal and nation’s growth.”

Encouraging the teams, Shri Rajesh Agrawal, Official delegate India for WorldSkills 2017 said, “WorldSkills is a global platform that helps us inspire our youth to compete in skills of transnational standards and quality. It’s a huge experience for us to learn the best in technology across skill sets through this international competition and be abreast with the global industry requirement. The youth are tested here on their finish, their delivery time, and the techniques they learn; and it’s a very proud moment for us to see the energy and passion with which the Indian Team is all set to give a tough match to 60+ other countries across the globe in this Olympics of Skills. My best wishes to the teams. May the best Skill win.”

Feeling proud of the Indian contingent, Mr. Manish Kumar, MD & CEO, NSDC said, “Each of these 28 competitors has undergone rigorous training under the guidance and supervision of respective industry experts. They have received international exposure through trainings conducted abroad and participation in other global skill competitions. The team has put their heart and soul into the preparations and I’m confident they will come out with flying colours and prove their worth.”

During the send off ceremony last week, the Hon’ble minister has also announced, the reward for the winners of the competition on their return.