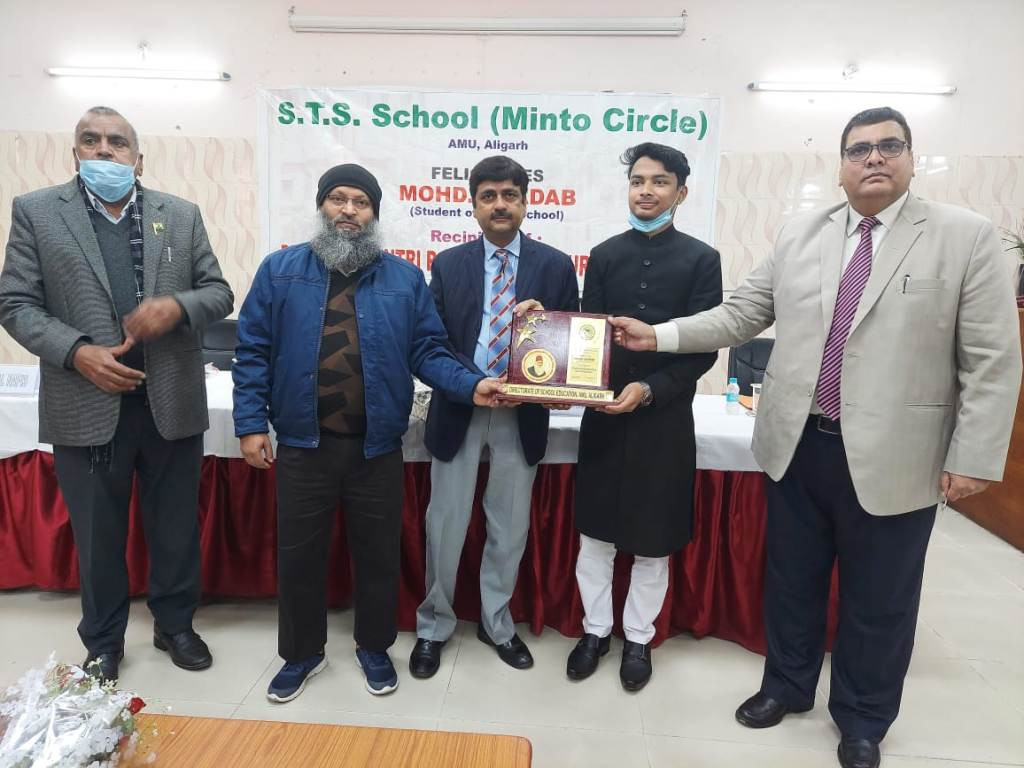 STS student interacts with PM, gets felicitated at school

Aligarh: Mohd Shadab, an 11th standard student of the STS School, Aligarh Muslim University (AMU), who has been awarded the ‘Pradhan Mantri Rashtriya Bal Puraskar 2021’ was elated and joyous after a virtual interaction with the Prime Minister Shri Narendra Modi.

Shadab’s exceptional abilities and outstanding accomplishments, in the field of scholastics earned him the remark of ‘Indian student ambassador’ to the United States of America by the Prime Minister.

He started, ‘Girls, say YES’, a non-profit organisation to promote women’s empowerment and delivered more than 50 presentations to promote Indian culture and values during his stay in the United States of America. He was in the US on the ‘Kennedy Lugar Youth Exchange and Study Program’ to complete high school before returning back to India.

When the Prime Minister asked Shadab about his inspiration; sparkling with high spirits, he replied that the story of hardship and of braving impossible odds of the late Dr A P J Abdul Kalam, the 11th President of India touched his heart and motivated him for his endeavour.

He told the Prime Minister, “Like Dr Kalam, even I want to do something big in my life and contribute to the Nation in the best of ways. I want to chisel myself into a person, who serves humanity.”

Shadab added that he wants to qualify Civil Services and become a transformer, and a change maker for the Country.

I also want to represent India in the United Nations, he stressed.

Prime Minister Modi praised Shadab’s parents for shaping up his behaviour and instilling and inculcating positive values of patriotism in him.

After the interaction with the Prime Minister, he was felicitated at his school during the Republic Day Celebrations.

Prof Asfar said that the AMU fraternity stands proud of Shadab’s achievements. He also praised the STS School staff and the Principal for grooming him.

It is hoped that the STS School will continue to produce such gems, said Dr Ashraf.

School Principal, Mr Faisal pointed out that Shadab is a role model for his batch mates and the rest of the school.

School teachers, Nasreen Fatima and Fauzia Fareedi conducted the programme and extended the vote of thanks respectively.