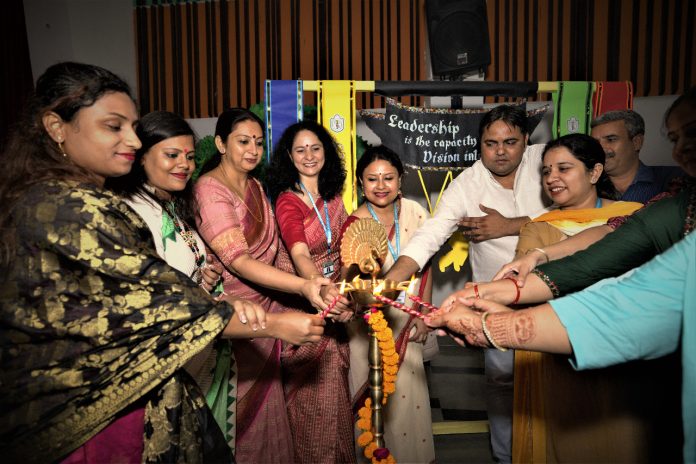 The Investiture ceremony of the 2022-23 session by DPS RNE took place on a grand scale in the mid-senior level on 5th August. The event was to conduct the official coronation of office bearers in the student council. The students were highly obliged by the administration’s faith in them and tearfully thanked the higher authorities for elevating them to high-level positions.

The presence of the school’s Principal, Mrs Pallavi Upadhayaya & headmistress, Mrs Priyanca Ghosh, increased the importance of the Investiture ceremony. They expressed an unwavering trust in the capabilities of students and also advised them to have a positive learning attitude and be role models for their juniors.

To mark an auspicious commencement of the event, a ceremonial lamp was lit, followed by the mesmerising lyrical performance by the school choir and band, drawing approbations across quarters. A yoga demonstration also added a certain flavour to the event. The crisp & immaculate Surya Namaskar performed by the young students was an awe-inspiring moment for everyone.

After that, students marched perfectly to the beats of the drums and formally received badges from the guests and higher authorities of the school. The Head Boy, and Head Girl, along with the House Captains and the Prefects, took an oath to discharge their duties with integrity, faith and excellence.The programme ended with a well-choreographed fusion dance performance which was an amalgamation of classical & western dance forms. The program drew to a close with the collective singing of the National Anthem.

Extending congratulations to the newly appointed members, Mrs Pallavi Upadhyaya said, “Humility is a virtue and hubris is a vice. A noble person is one who, despite having powers, does not become pretentious and conducts herself or himself with humility and kindness. He or she does not become overbearing and officious and stands true to their values, increases their level of empathy and compassion and becomes an archetype that others can also follow. This is my heartfelt advice to every council member. I wish you all the best for your future endeavours.”