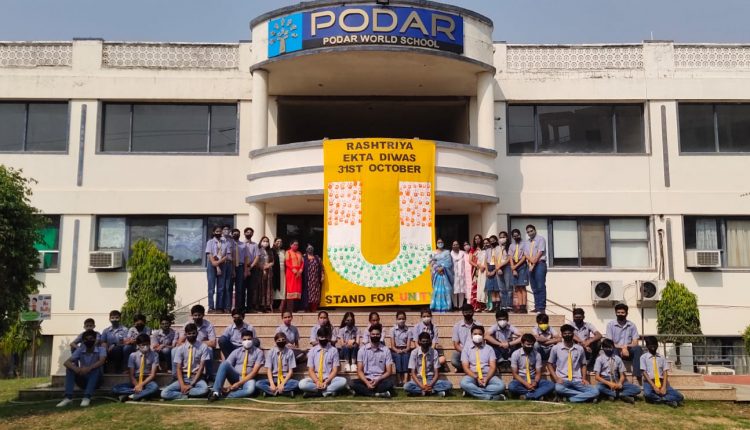 New Delhi: National Unity Day or Rashtriya Ekta Diwas is celebrated every year on 31st October since 2014 to mark the birth anniversary of Iron Man of India–Sardar Vallabhbhai Patel. This year marks the 145th birth anniversary of the freedom fighter and an ace politician. To comemorarte this momentous occasion, students of Podar World Schools across India made a cut-out on a cloth with a message of ‘U for Unity’ written using their handprints at their campus. Students from 8th to 12th standards had participated in making this unique formation, as a part of celebrating this day.
Explaining about the unique initiative, Mr Raghav Podar, Chairman, Podar Education said, “Sardar Patel played a major role in the integration of India (Ek Bharat) by bringing over 560 princely states under one fold. He always believed that the safety and preservation of these states as well as of India rested on unity and mutual cooperation between its different parts. By common endeavour, we can take the country to new greatness, whereas lack of unity will expose us to fresh calamities. We wanted to convey this ethos of him to our students and hence thought of coming out with this initiative. They will not only have a real-time experience but also will be able to imbibe many soft skills like creativity, teamwork, leadership, communication and a few others”.

University of Southern California: A Catholic theologian argues for a death row inmate’s right to have the pastor’s touch in the execution chamber

University of Southern California: USC Stem Cell: An incubator for medicine of the 21st century