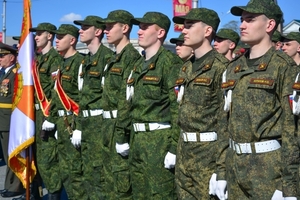 I decided to go to study at the military department in order to immediately go to work in my specialty after graduating from the university, without losing a year in the army. Studying at a military training center, on the one hand, is quite difficult, but on the other -very interesting. You become more disciplined, you begin to take responsibility for your actions, and in addition to all this you learn the craft of war. And we will participate in the parade on May 9th. This is the day when we can proudly remember the great victory in the Great Patriotic War and pay honors to those who defended their Motherland at the cost of their own lives. This day allows us to show that nothing is forgotten, that we will remember our grandfathers and great-grandfathers, and we will pass this story from generation to generation. The military training center allocated a ceremonial crew for the passage of a solemn march on the square along with other military institutions. This is a great honor, which did not fall to all students of the military department, and I am glad that I am one of those who received this honor. A small dream from childhood, which will soon come true. As if the whole world is looking only at you, and you have to show yourself in all its glory. But there will be other comrades with you- students who are looked at by everyone in the district. And of course, we will all walk this march with dignity!

I decided to study at the Military Training Center of PetrSU because it is interesting for me. He learned things that will be needed not only in military affairs, but also in everyday life. Composure appeared in the character, became even more responsible. When it was announced that I would participate in the parade, I felt proud. I am proud of my homeland.