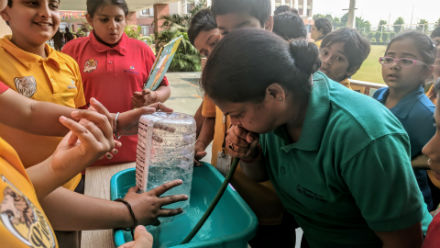 Noida: At a time when the air quality index (AQI) in Delhi NCR is at its worst, at around 450 on a scale of 500, grade six and nine students of Shiv Nadar School Noida (a not-for-profit initiative of the Shiv Nadar Foundation in K12 education) have initiated a drive to scientifically address the specific issue of air pollution.  They have worked on developing an innovative air quality monitoring mechanism and have conducted lung capacity test to demonstrate the respiratory deterioration caused by pollution. They have also created a cost-effective prototype of air filter model and air humidifiers. This air filter model is equipped to remove solid pollutants like emission from products like paints, burning fuel, construction rubble as well as allergens like pollens and molds.

On the innovative efforts of the students, Ms Shashi Banerjee, Principal, Shiv Nadar School Noida said, “Air pollution is a threat to the society’s health at large and the situation in Delhi NCR is getting worse day by day. Given this, our students and teachers came up with a well-thought out experiment to spread awareness among people about the alarming level of air pollution due to burning of crackers and solutions to help curb and monitor air pollution. This was done by showing the effect of the same on our lungs.”

“At Shiv Nadar School, it is our constant endeavour to inculcate innovation and problem solving skills in students, thus leading to the development of a sound scientific temper. We challenge students to develop workable solutions for problems in their immediate environment making use of technology and deep understanding of scientific concepts. This is an initiative in the same direction, and I am happy to see the learning students have derived from it,” said Col. Gopal Karunakaran, CEO, Shiv Nadar School.

Lung Function Test – About the test, comparative analysis and results

The students created a scientific model to test the vital capacity of lungs of people of different age groups, before and after Diwali. Vital capacity (VC) is the maximum amount of air a person can expel from the lungs after maximum inhalation. A person’s vital capacity can be measured by a wet or regular spirometer or a model created on the same principles. The spirometer model was created using a water can (filled with 5 litre water), a rubber tube and a large container to hold the water and can. The can was inverted on the container with a rubber tube inserted inside. The can was callliberated on a scale of 5 litre and marked with the equal divisions of 250 mL.  People of different age groups and gender were asked to blow inside the rubber tube in one go (up to their maximum capacity). Blowing the air inside the tube allowed water to displace out of the can. The students measured the individual lung capacity by comparing it with the amount of water displaced from the can. They calculated the lung capacity by multiplying number of divisions up to which water got displaced with 250 mL to find the lung capacity of each person.

The students collected data of over 100 people (before Diwali) and 56 people (after Diwali) and calculated the average result. The lung capacity was found to be very low in comparison to the ideal capacity level.  The results also suggested that:

Air collection mechanism- about the experiment and results

Grade nine students designed an air collection mechanism using a syringe and arduino circuit to collect air samples at different heights with the help of hydrogen balloons. The air was collected inside the syringe connected with a circuit timed at various intervals, which was sent up in the air using hydrogen balloons. The collected air samples were then transferred in different syringes and sent to Central Pollution Control Board for analysis. Results of air quality monitoring test are as follows (This data is of the samples collected on 2nd November 2017 at around 5.00 pm at the Shiv Nadar School, Noida Campus)

Above data shows every pollutant – Ozone O3, Pariculate matter 2.5 and 10, Carbon Monoxide CO, Sulphur Dioxide SO2 and Nitrogen Dioxide NO2  and the Air Quality Index (AQI) increased with height.

The students intend to do this experiment at different places and at greater heights.

The suggested measures by the students are as follows: