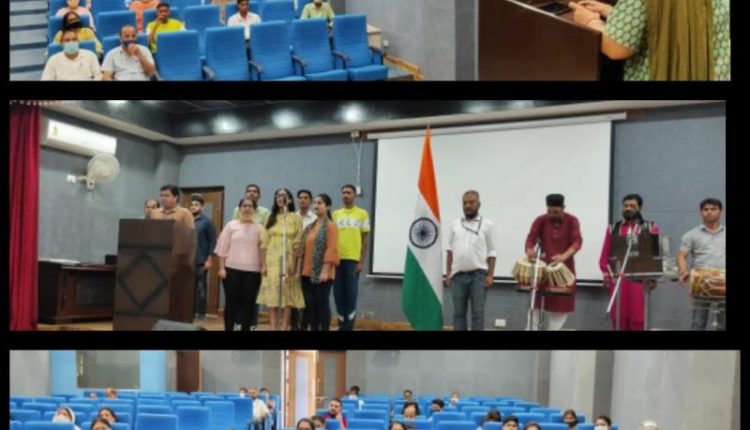 During the program, the children of different schools who participated and were declared winners of the National Anthem singing competition organized by the Department of Information and Public Relations (DIPR) were also felicitated.

Addressing the students, Joint Director Information, Jammu, Ms Namrita Dogra congratulated the winners and participants of the competition. She urged them to explore new platforms to display their talent and create a niche in the society. She said that the objective of organising the competition was to provide a platform to local youth to showcase their skills and talent.

She said that such endeavours inculcate discipline, self- confidence, sense of responsibility and most importantly patriotism among the youth, which is imperative for building a strong nation.

During the event, a cultural program was also presented by the artists of the cultural wing of JDI Jammu featuring patriotic and folk songs.

Addressing the gathering, the Deputy Director PR Jammu, Gul Hassan Kraipak lauded the efforts of the participants and appealed everyone to follow the Covid-19 safety protocols and disseminate the awareness regarding the same among their acquaintances and the people in their neighbourhood.

Youth Information Officer, Imran Rashid Kataria and other officials of DIPR Jammu were also present on the occasion.