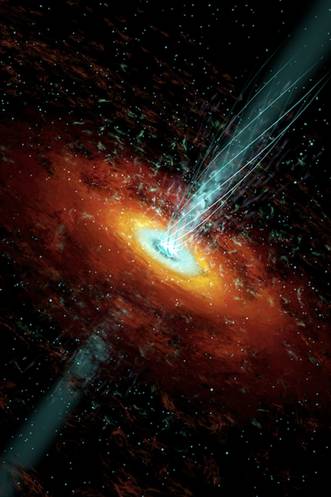 New Delhi: Through 153 nights, 17 scientists from 9 countries in Europe and Asia including researchers from Aryabhatta Research Institute of Observational Sciences (ARIES), Nainital, an autonomous institution of the Department of Science and Technology (DST), Government of India took 2263 image frames and observed the changes in a very high energy gamma-ray emitting blazar ‘1ES 0806+524’ using seven optical telescopes in Europe and Asia.

A blazar is a feeding super-massive black-hole (SMBH) in the heart of a distant galaxy that produces a high-energy jet viewed face-on from Earth. Blazars are one of the most luminous and energetic objects in the known universe with a jet composed of ionized matter traveling at nearly the speed of light directed very nearly towards an observer.

Dr. Ashwani Pandey, guided by Dr. Alok C. Gupta from ARIES in their study published in the Astrophysical Journal, has provided the most extensive observations of this blazar, thereby chalking out the detailed optical properties of the blazar. The team studied in great details 1ES 0806+524’ flux, color, and spectral index variations within a day and long timescales of the blazer and explained the mechanism behind the variations.

They explained the large flares as the result of propagation of a shock in the relativistic jet that accelerates electrons to high energies followed by subsequent cooling. According to their study, the small amplitude changes can be understood to arise from small variations in the viewing angle, and hence in the Doppler factor, caused by either wiggling or helical jets or the motion of the most intense emitting region on a roughly helical trajectory within the jet. Variations on intra-day timescales can be explained by the turbulence expected in a relativistic plasma jet according to the study.

In this age of multi-wavelength (MW) time-domain astronomy in which the transient astronomical sources are of great interest due to their rapid change in flux and polarization. Simultaneous MW observation of a particular transient source on an extended period of time is important for understanding the emission mechanism in different electromagnetic (EM) bands. Blazars are among one of the most favourite astronomical transient objects because they emit radiation in the complete EM spectrum, and their flux and polarization are highly variable.