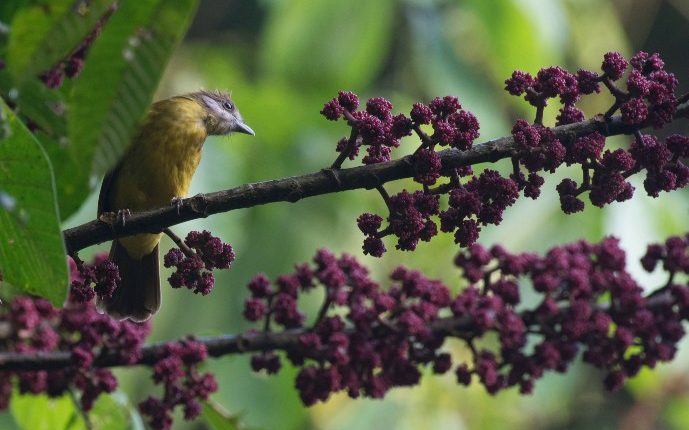 Indore: A recent study from the last remaining lowland tropical evergreen forest patches in north-east India highlights the conservation value of forest fragments as they harbour an array of interactions between plants and fruit-eating (frugivorous) birds.

Published on 26th June 2021 in Biotropica, this is among the first studies from the Asian tropics to study the impact of forest fragmentation on plants and frugivorous birds. This study was conducted between January and April 2019 by a team of scientists from the Wildlife Institute of India (WII, Dehradun) and the Nature Conservation Foundation (NCF, Bangalore). 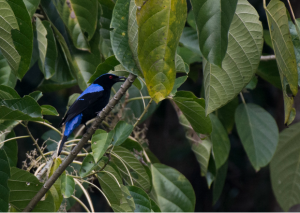 “At the scale at which forests are shrinking, it is crucial to find out how ecological interactions like the ones between plants and seed-dispersing birds are altered because of fragmentation,” says Abir Jain, the lead author of the study. “This study looked at the differences in the plant and frugivorous bird communities between forest fragments and contiguous forest and we found that fragments harbour diverse sets of interactions”, he adds. The authors collected field data by observing the feeding activity of frugivorous birds inside the forests and documented the diversity of fruit species they fed upon. Sampling was conducted in two forest fragments experiencing degradation pressures; Doom Dooma Reserve Forest, Kakojan Reserve Forest (both ~25 km2) and a less disturbed, better protected contiguous forest patch; Dehing Patkai National Park (>100 km2). 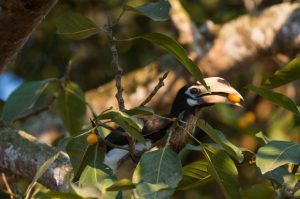 Team from WeSchool, Mumbai announced winner of the national…

Habitat degradation and associated gaps in the tree canopy in forest fragments could promote the fast growth of shrubs and climbers. Interestingly, fruits of certain climber species and fig trees were found to be important resources for frugivores, particularly in the fragments. “Different species and individuals of figs fruit at different times of the year and serve as a vital source of food all year round including the lean season. This underscores the importance of figs and the need to conserve them,” explains co-author Dr Navendu Page, a plant ecologist from WII.

The study also reported that small-sized frugivorous birds (bulbuls and barbets) fed upon the highest number of fruit species at all sites, highlighting their crucial role in seed dispersal in contiguous and fragmented forests. Notably, the near-threatened, White-throated Brown Hornbills were found to be important seed-dispersers of large-seeded plants in the fragmented forests. Besides, the authors have also documented their breeding in these rainforest fragments. “This study highlights the value of the remnant forest patches even for large-sized birds, like the Brown Hornbill, that plays an important role in the dispersal of large seeds which not many other birds can disperse. The range of Brown Hornbill is shrinking in north-east India due to habitat loss and hunting, thus conserving these remnant forest patches for the conservation of these birds is vital,” says Dr Rohit Naniwadekar from NCF, the co-author of the paper.

The findings from this study highlight the conservation value of north-east India’s last remaining lowland rainforest fragments and the diverse sets of plant–seed disperser interactions they harbour. Remnant fragments can act as ‘stepping stones’ for preserving regional biodiversity and facilitate connectivity between fragments and contiguous forests for wide-ranging species to move across the fragmented landscape. While certain areas in the landscape are better protected, the future of many rainforest fragments in this region maybe perilous. “Administering improved protection and active ecological restoration by planting native fruiting plants in degraded fragments with the support of local communities must be carried out to preserve these fragments and the biodiversity they represent,” says co-author Dr G. S. Rawat, former dean and scientist from WII.

About seed dispersal by frugivorous birds and fragmentation

Up to 90% of plants in tropical forests could be dependent on animals for the dispersal of their seeds. For this reason, frugivorous birds are particularly referred to as the gardeners of the forests. While birds benefit from the nutrition they get from the fruit pulp, plants benefit as birds carry their seeds away from the mother plant before dispersing them. For some species, the treatment that seeds receive in the guts of animals enhances their ability to germinate. Escape of seeds away from the mother plant is important as otherwise, they are prone to attack by pathogens like fungi, insect larvae, and seed-eating mammals like rats. Such mutually benefiting interactions between plants and frugivorous birds facilitate the regeneration of plants, maintain biodiversity, and ensure good health of the forests.

Unfortunately, tropical forests of Asia experience among the highest rates of forest loss and habitat fragmentation in the world. The Upper Brahmaputra Valley in eastern Assam, north-east India is characterised by remarkable biodiversity and had contiguous tracts of lowland tropical evergreen forests. These forests harbour a rich diversity of mammals such as the Asian elephant, Western hoolock gibbon (the only non-human ape species in India), Capped langur, Clouded leopard, Indian giant squirrel, and Malayan sun bear to name a few. However, these forests have undergone severe fragmentation and conversion to tea plantations and agriculture coupled with the extraction of natural resources such as oil, coal, and timber over the past century. Consequently, the remnant forests occur as a mosaic of isolated fragments of varying sizes, protected as Reserve Forests and Wildlife Sanctuaries that continue to face anthropogenic threats and associated degradation.