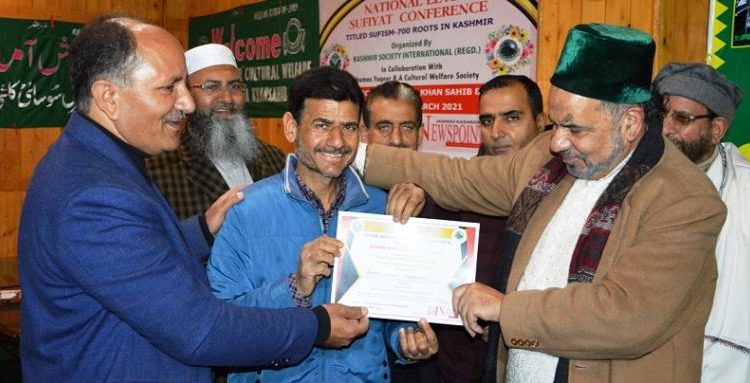 While welcoming the gathering of scholars, poets, writers and other distinguished guests, Chairman Kashmir Society International, Khawaja Farooq Renzu Shah said that Budgam is abode of Sufiyat since times immemorial.

He said that in his capacity as chairman, it is a blessing for him to get involved in reconstructing Khankah Faiz Panah Sheikh-ul-Alam at Chareshareef that suffered damages in devastating fire. Renzu said that Hazrat Imam Azam Abu Hanifa (ra) had taught the concept of unity brotherhood and coexistence, therefore the sufiyat had always spread throughout the world under the umbrella of his pious jurisprudence.

During the conference all the Scholars, including Majeed Masroor, Dr. Tabish, Dr. Andrabi, Dr. Shad Ramzan, Syed Ahmed SDM Khansahab presented their speeches in which they highlighted the contribution of Sufi scanty.

On the conclusion an award ceremony was organized in honour of the winning personalities. The awardees were presented with shawl and certificates and these include Professor Shad Ramzan, M Yusuf Akash, Atta Mohammad AIO on behalf of the District Information Centre for their sincere support and collaboration.