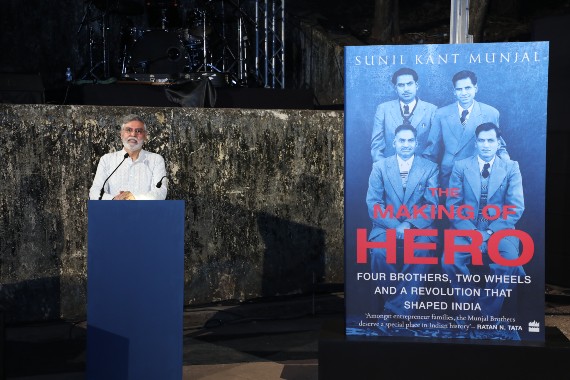 New Delhi: The Making of Hero: Four Brothers, Two Wheels and a Revolution that Shaped India – HeroEnterprise Chairman Sunil Kant Munjal’s personal tribute that captures the incredible journey of the Hero Group’s founders — has won the Business Book of the Year 2020 Award at the prestigious Tata Literature Live! Festival.

The Tata Literature Live! Festival, or Tata Lit Fest as it is popularly called, was held virtually over six days beginning November 16, and attracted more than a million digital visitors. The festival culminated with the Awards Evening on November 22.
The winner was selected by a high profile jury made up of Padma Shri Anil Gupta, Founder, Honey Bee Network; Padma Shri Kiran Karnik: Former President of Nasscom and Member of the Scientific Advisory Council to the Prime Minister, Padma Vibhusnan R A Mashelkar, one of India’s most renowned scientists, and well known journalist-turned entrepreneur Govindraj Ethiraj and Mini Menon, Co-Founder, Live History India.
Published by HarperCollins, The Making of Hero was pitted against a strong field that included Arvind Panagariya and Jaspreet Bindra. After reaching the short list, The Making of Hero edged out Sudhir Sitapati’s The Brand Factory and B S Ajaikumar’s Excellence has no Borders.

Pearson amps up its consumer marketing as part of the India…

Accepting the award from Dr. Mashelkar, author Sunil Kant Munjal said: “The Making of Hero could be considered a management book, a history book or a family business saga but for me, it is a labour of love. I accept this honour on behalf of the Hero Parivaar —family members, employees, dealers, suppliers and service providers who have partnered and grown to become an extension of Hero. This is their award as much as it is mine.
I wrote this book to celebrate the life and times of my father and uncles in a ravaged India, a struggling India and in an emerging India – they are the true Heroes of this story. I hope readers see this as a timeless story of aspiration and the power of the human spirit and derive some lesson from it. Stories of grit must be told to as many people in as many ways as possible and I am delighted that a Hindi edition will also be published early next year.’’
Krishan Chopra, Publisher, HarperCollins India said: “The award for The Making of Hero has a special resonance for us as there are few books which highlight as well as it does how homegrown ethos and managerial philosophy, in combination with a judicious culling of wisdom from international business practices, can take Indian business right to the top. This is Indian innovation at its best. We are proud of its success.’’

Sachin Sharma, Senior Commissioning Editor, HarperCollins India added: “ ‘Tata Literature Live’s recognition comes at a time when the world is looking at India to be the next manufacturing powerhouse. The Making of Hero is your original ‘Make in India’ or ‘Atmanirbhar Bharat’ story as it proves how the Munjal brothers created a world leader with the power of self-belief.”’

Many of the best practices that are now considered contemporary in the world of business and management were in place and operational within the Hero system for decades. The author has tried to chronicle these against the backdrop of what was happening in India and the world in the years following Independence, right up to the new millennium and beyond.