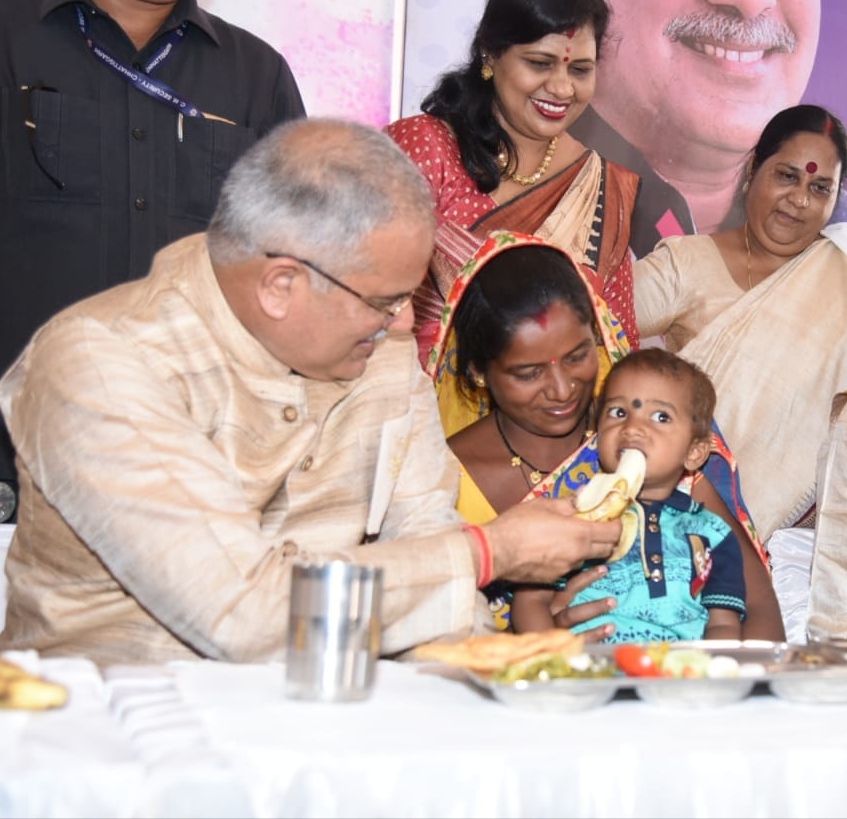 Suposhan Abhiyan turning out to be a major success in Chhattisgarh: More than 67 thousand children cured of malnutrition under the campaign

Raipur: Mukhyamantri Suposhan Abhiyaan and integrated plan of various schemes has been a big success in eliminating malnutrition among children in the state. According to the data obtained from the vazan tihar held in the year 2019, 9 lakh 70 thousand children were malnourished in the state, out of which 67 thousand 889 children have become free from malnutrition as on March 2020. In this way the number of malnourished children has decreased by 13.79 percent, which is a major victory in the battle against malnutrition. The credit for the significant decline in the rate of malnutrition in such short span goes to the far-sighted thinking of Chief Minister Mr. Bhupesh Baghel and his competent leadership.
After the formation of the new government in Chhattisgarh, Chief Minister Mr. Baghel launched this campaign to free the state from malnutrition and anaemia, in view of the rate of malnutrition and anemia in women and children in the data of National Family Health Survey-4. According to National Family Survey-4, 37.7 percent children under the age of 5 years were suffering from malnutrition and 47 percent women aged 15 to 49 years were suffering from anemia. As per the data, 9 lakh 70 thousand children were malnourished in the state. Most of these were tribal and children from remote forest areas. These figures were taken as a challenge by the new government and with the concept of ‘malnutrition-free Chhattisgarh’, Chief Minister launched Mukhyamantri Suposhan Abhiyaan across the state from 2 October 2019, on the occasion of 150th birth anniversary of Mahatma Gandhi. Public participation has been ensured with priority to ensure the success of the campaign.

Suposhan Abhiyan was started as a pilot project in some gram panchayats of forest areas, including naxal-affected Bastar in the state. This was further enhanced through innovative programs such as distribution of hot-cooked nutritious meal through panchayats in Dantewada district and Laika Jatan Tihar in Dhamtari district. Optimal utilization of the District Mineral Fund was ensured to provide hot-cooked food under the Suposhan Abhiyan. Considering the success of the pilot projects, Chief Minister Mr. Baghel implemented this campaign in the entire state from 2 October. Under this campaign, local free nutritious food and hot-cooked food was being distributed to the malnourished women and children, in addition to the distribution of supplementary nutritious food to the identified children in the Anganbadi center. Anemia affected people are being provided iron folic acid, antihelminth tablets. Women and Child Development Department, Health Department and other departments are making coordinated efforts with the goal of alleviating malnutrition from the state in the next 3 years.

All Anganbadi and Mini Anganbadi centers have been closed for prevention and control of infection of Corona virus (Covid-19). In such a situation, to maintain the nutrition-level of children and women, Chief Minister has ensured distribution of ready-to-eat nutritious food to about 28 lakh 78 thousand beneficiaries of 51 thousand 455 Anganwadi centers in the state with the help of Anganwadi workers. Under the Mukhyamantri Suposhan Abhiyan, arrangements have been made to distribute dry rations in place of cooked food to the beneficiaries. Under this, three lakh 47 thousand beneficiaries have been provided dry ration till May month this year. The World Bank has also praised the efficient role played by Anganbadi workers in prevention of corona virus infection as well as take home ration distribution work. Keeping in mind the health and safety of women and children in Chhattisgarh, all the women and children residing in the Quarantine Center have been put in a safe building and their vaccination, necessary medicines, health checkups are being ensured.

Along with free counseling and counseling services to children and women affected by malnutrition, regular monitoring of the facilities is also being done. Efforts are also being made to create public awareness through Suposhan chariots, camps and discussions. UNICEF has praised the malaria free Bastar campaign launched in Bastar district and the Kitchen Garden Horticulture under School Education Department as a unique path for improving the nutrition level and eradication of anemia