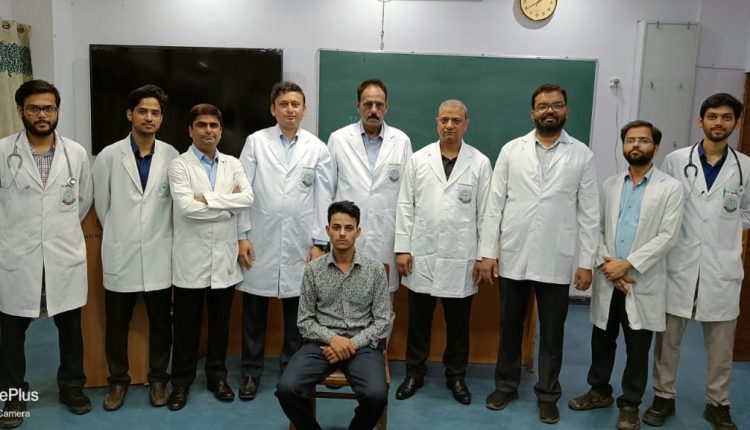 Aligarh: A small cut (incision) was made near the belly button of 17-year-old Lalit to insert wandlike devices equipped with cameras and small surgical tools. His abdomen was inflated and the non-functional left kidney removed as the surgeons kept seeing the insides on a monitor showing laparoscopic relayed images.

This was the first ever Laparoscopic Nephrectomy through the keyhole approach at the Jawaharlal Nehru Medical College (JNMC), Aligarh Muslim University (AMU) performed successfully by a team of Department of Surgery doctors, Wasif Mohammad Ali and Manzoor Ahmad under the guidance of Prof Syed Amjad Ali Rizvi.

The patient sat relieved with only a urinary catheter in place for a short time at JNMC before he was discharged after recovery to carry on with normal chores of life.

“Lalit no more suffers a range of health issues, which he was experiencing for the past two years. Problems such as high blood pressure, intense stomach ache, bouts of headache, blurring of vision and redness of eyes often sent him to hospitals. But doctors were unable to diagnose him until he reached JNMC—where a scan showed that his left kidney was non-functional and had to be removed through a Laparoscopic Nephrectomy, without making large incisions”, said Dr Wasif Mohammad Ali and Dr Manzoor Ahmad.

They added: “The patient was put on multiple anti-hypertensive medications. A team of doctors from different specialties attributed the cause of his frequent high blood pressure to the non-functional kidney”.

“For a person without the professional or specialised knowledge, living with less than two fully functioning kidneys would mean long -term complications; but health workers can assure that the remaining kidney works well enough for a healthy life provided that the patient follows the recommended lifestyle changes and remains careful”, emphasised Prof Syed Amjad Ali Rizvi.

Extending congratulations to the surgeons, AMU Vice Chancellor, Prof Tariq Mansoor said: “Patients from lower income groups, no more need to pay exorbitant fees for these procedures at private hospitals in metropolitans. Our surgeons, doctors, nurses and the support staff are ensuring that these patients walk out of the hospital in the best of health after undergoing rare surgeries”.

Prof Afzal Anees (Chairman, Department of Surgery) pointed out: “Our surgeons are conducting a number of complicated interventional procedures and surgeries at a very high success rate on a daily basis”.

iednewsdesk Jun 3, 2022
Four members of staff at the University of St Andrews have been recognised in the Queen’s Birthday Honours List…