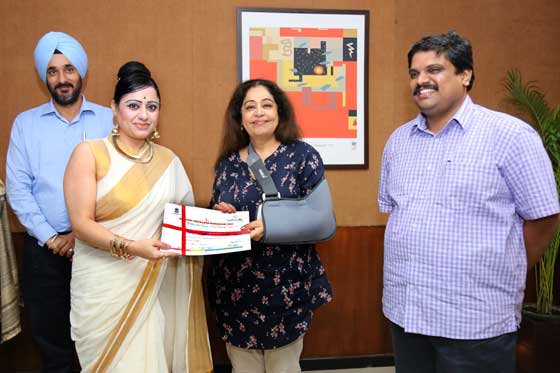 Chandigarh: Chitkara International School was awarded with the district level Swachh Vidyalaya Puraskar2017 in the sub category of toilet with a score of 100% with 5 star rating. The award was felicitated by Ministry of Human Resource Development, Government of India under the initiative ‘Swachh Bharat Swachh Vidyalaya’ (SBSV).The initiative has its emphasis on promoting safe and appropriate hygiene practices in schools and behaviour among children.
The Swachh Vidyalaya Puraskar was instituted by the Ministry of Human Resource Development, Government of India in 2016 to recognize, inspire and celebrate excellence in sanitation and hygiene practice in schools. The explicit purpose of the awards is to honour schools that have undertaken significant steps towards fulfilling the mandate of the Swachh Vidyalaya Campaign.
Member of the Lok Sabha and Indian actress Ms. KirronKher accorded the award to the Principal, Dr. Niyati Chitkara. Deputy Commissioner Mr. Ajit Balaji Joshi, IAS and Sh. Rubinderjit Singh Brar, PCS, Director School Education was also present in this moment of accolade.
The school was commended for sanitation, hygiene, rain water harvesting and other operations of the school. This award marked the school’s philosophy to cultivate cleanliness and sanitation in the school premises in a comprehensive way. Among many schools competed in the awards category of toilets and sanitation, Chitkara International School stood tall with 100% score and 5 star rating.
Expressing gratification, Dr Niyati Chitkara, Principal of Chitkara International School said, “We are thankful to the management, staff and students for their involvement in keeping the school clean at all times. We at Chitkara International School nurture the habit of cleanliness among students along with their academics. We are happy that our efforts to consistently educate the children on health, hygiene, environment and ethical values are being recognized on platforms like Swachh Vidyalaya Puraskar. We are happy to have achieved this recognition from the Union Government.”

HRD Minister inaugurates more than 3400 Test Practice Centres for entrance examinations for Higher Education, across 622 Districts in the country