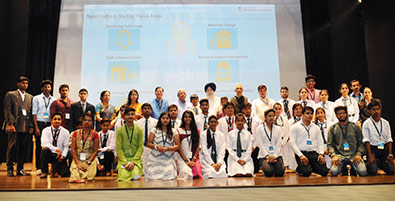 Swachhathon 1.0 receives massive response from young innovators of the country

New Delhi: Swachhathon 1.0, the first ever Swachh Bharat Hackathon, was organized by the Ministry of Drinking Water and Sanitation to crowd source solutions to some of the Sanitation and Hygiene challenges faced in various parts of the country. The Ministry invited innovators from schools and colleges, institutions, start-ups and others to come up with exciting, innovative, novel and viable solutions to the following 6 challenges:

d)       Working solutions for maintenance and operations of school toilets.

The hackathon was open for all (including international entries), and was hosted on the innovate.mygov.in portal.

The Hackathon received a massive response from across the country, with 3053 entries received overall with 633 entries in triggering behaviour change, 229 in early decomposition of faecal matter, 750 in monitoring usage of toilets, 552 in maintenance and operations of school toilets, 405 in Technological solutions for safe disposal of menstrual waste and 484 in Toilet Technologies in Difficult terrains categories.

The selected finalists gave a short presentation showcasing their prototype/ strategy before a jury consisting of stalwarts and experts from the Sanitation sector. The Grand Jury for the final comprised Smt Naina Lal Kidwai, Shri Bindeshwar Pathak, and the Secretary, Ministry of Drinking Water and Sanitation, Shri Parameswaran Iyer. The evaluation was based on an evaluation framework designed by the Ministry that took into account the originality of the solution, utility, cost-effectiveness, ease of maintenance, sustainability, scalability and environment-friendliness.

The winners of the Swachhathon were awarded by the Ministers of State, Ministry of Drinking Water and Sanitation, Shri SS Ahluwalia and Shri Ramesh Jigajinagi. Speaking at the awards ceremony, Shri Ahluwalia, expressed his pleasure at seeing the young innovators who had participated in the Swachhathon. He said that the Swachathon was a new concept adopted by the Ministry because linking government programmes with technology was the need of the hour. He acknowledged the good progress made by the Swachh Bharat Mission so far and said that he was sure that initiatives like the Swachhathon would go a long way in increasing involvement of innovators and the youth in the programme. Shri Jigajinagi spoke about the need for innovative approaches to take the Swachhta movement forward in the country, and congratulated all participants who contributed ideas to the hackathon. He expressed hope that the ideas coming out of the Swachhathon would help lend innovation and renewed vigour to this citizens’ movement.

Speaking at the ceremony, Secretary, MDWS, Shri Parameswaran Iyer, spoke about the progress made by the Swachh Bharat Mission so far. He mentioned that it was very encouraging that sanitation coverage in the country has gone up from 39% at the launch of the SBM to 67% today with 2.35 lakh villages having been declared Open Defecation Free (ODF), and that this progress had been verified by third-party independent agencies as well. He said that the ideas presented at Swachhathon would be crucial to help meet some of the special challenges being faced on the field in some parts of the country. He urged the innovators who participated in the Swachhathon to share these ideas to the Mashelkar Committee of the Ministry so that they may be implemented at scale in the country. He encouraged all participants by reminding them that the logo of Swachh Bharat Mission itself was a crowdsourced idea, which underscores the power than an individual’s idea may have in taking the country forward.

Based on the cumulative assessment by the jury, the winners were announced for each category earlier today in the Capital. The final event was organized in collaboration with AICTE and supported by KPMG, Bill and Melinda Gates Foundation, Water Aid, Rotary India Literacy Mission, HMEL, Accenture and Dettol Banega Swachh India.