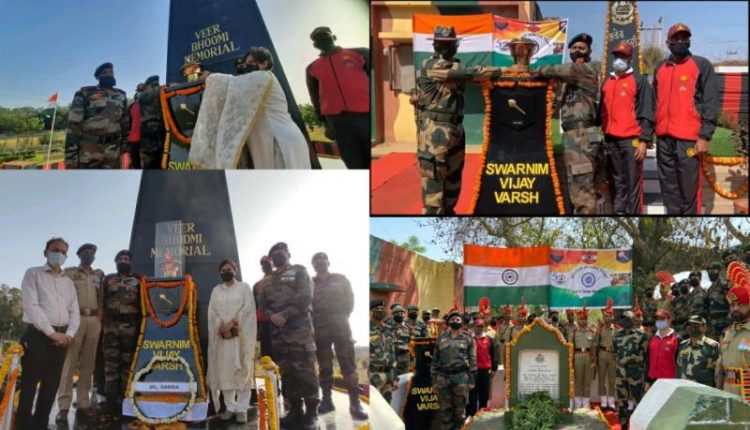 Samba: As part of ongoing Swarnim Vijay Varsh celebrations, being held to ensure that the Victory Flame reaches every 1971 war veteran, the victory flame was today taken to the border villages of Samba district and wreath was laid by army and BSF personnel at war memorial at BOP.
Later in the evening, a wreath laying ceremony was organized at Veer Bhoomi Park, which is a revered war memorial, built in remembrance of the martyrs of Samba.
Deputy Commissioner Samba, Anuradha Gupta, laid the wreath to honour the supreme sacrifice of Samba warriors.
SSP Samba, Rajesh Sharma; Colonel Manish Sharma, SM; Colonel Hitesh Kumar from Mission First Brigade; members of civil society; Social Club were also present.
Many war veterans also graced the ceremony by their gracious presence.
Speaking on the occasion, the DC said that this Veer Bhoomi Park is an apt place to honour our gallant soldiers. She said that the district administration Samba will make sincere efforts to make this place even better. She ensured that name of the martyrs which have been left would be added on the memorial very soon.
On April 11, 2021 a grand ceremony will be organized at APS Samba where 1971 war veterans and veer naaris would be felicitated.