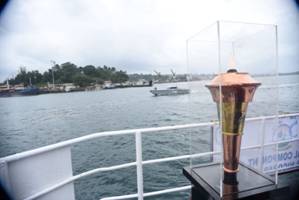 New Delhi: The Swarnim Vijay Varsh Victory Flame was taken to Netaji Subhash Chandra Bose Island, formerly Ross Islands, under the aegis of the Naval Component of Andaman and Nicobar Command, on August 04, 2021. The Victory Flame was accorded full ceremonial honours along with wreath laying and salutations by the Indian Navy Guard as a tribute to the fallen heroes of the 1971 war at the ‘Lone Sailor Statue’.

The ‘Lone Sailor Statue’ overlooking the approach to Port Blair harbour was constructed to honour those who put up a gallant act at sea and made the supreme sacrifice. In the context of the 1971 war, the event was organised to pay tribute to the supreme sacrifice by the officers and sailors of INS Khukri, including the Commanding Officer Captain Mahendra Nath Mulla (Maha Vir Chakra posthumous) who chose to go down with his ship.

Aakash+BYJU’S launches its New Classroom Centre at Powai in…

The Island is situated three kilometres East of Central Port Blair. Netaji Subhash Chandra Bose had hoisted the national Tricolour there in December 1943 during the freedom struggle. To commemorate the 75th year of the historic event, Prime Minister Shri Narendra Modi had renamed Ross Island as Netaji Subhash Chandra Bose Island on December 30, 2018.

After visiting the Island, the Victory Flame came back to Port Blair Jetty. All COVID-19 protocol measures were followed by the personnel present at the event.

University of Pretoria: UP hosts webinar on teacher education and the UN’s Sustainable Development Goals

Aakash+BYJU’S launches its New Classroom Centre at Powai in Mumbai; 13th in the…