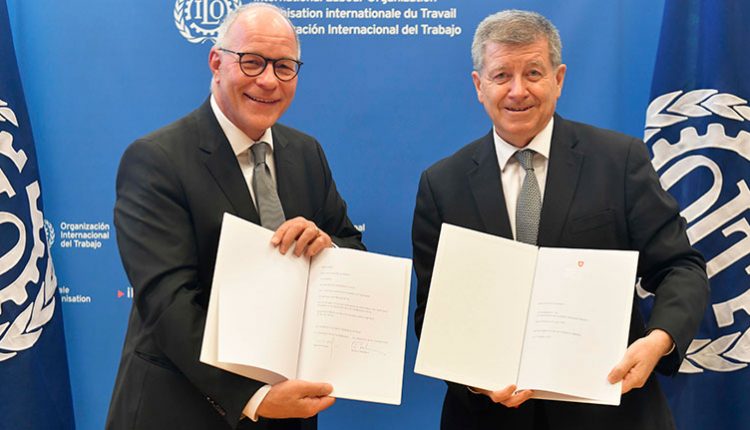 By India Education Diary Bureau Admin On May 1, 2022
Share
On 7 March 2022, the Swiss Government deposited with the Director-General of the ILO the instrument of ratification of the Chemicals Convention, 1990 (No. 170)  and the Prevention of Major Industrial Accidents Convention, 1993 (No. 174) .

Depositing the instruments of ratification, Boris Zürcher, Head of the Labour Directorate at the State Secretariat for Economic Affairs (SECO), said: “Ratification of these two Conventions represents an important step towards strengthening occupational safety and health. It is part of the priority action of the Labour Inspectorate for the years 2022 and 2023 which aims to increase the level of protection in companies when using chemicals. The ratification also marks Switzerland’s willingness to continue its commitment, together with the ILO, to the respect of safe and healthy working conditions.”

On receiving the instruments of ratification, ILO Director-General Guy Ryder congratulated Switzerland on the ratifications, saying: “I am very pleased to welcome the deposit of the instrument of ratification of Conventions No. 170 and No. 174 by Switzerland, which brings the total number of OSH Conventions that Switzerland has ratified to ten. By ratifying these two Conventions, Switzerland confirms its strong commitment to the need to protect workers, the public and the environment from the possible adverse effects of hazardous chemicals and to prevent major industrial accidents involving hazardous chemicals.

He pointed out that: “Millions of workers around the world lose their lives every year or suffer chronic illnesses due to chemicals and other hazardous substances in the workplace. Occupational safety and health has been at the heart of the ILO since its inception. The relevant technical Conventions help to protect workers from exposure to hazardous chemicals and create a solid, preventive and protective foundation.”

“The use of chemicals at work can have significant adverse effects on human health and the environment. The Chemicals Convention (No. 170) and its Recommendation were adopted in 1990 and call on ILO member States to develop, implement and periodically review a coherent policy for the safe use of chemicals at work. Instead of prohibiting the use of certain substances, these instruments give priority to prevention. The Convention has a policy-based approach and recognises the roles of employers and workers in managing occupational safety and health issues. Switzerland becomes the 23rd Member State to have ratified this Convention.”

“The Prevention of Major Industrial Accidents Convention, 1993 (No. 174) and its Recommendation were adopted in 1993 and deal with the prevention of major accidents involving hazardous chemicals and the limitation of their consequences. The Convention requires Member States to formulate, implement and periodically review a coherent national policy for the protection of workers, the general public and the environment against major-accident hazards. The Convention states that this policy should be implemented through preventive and protective measures for installations with major accident hazards and, as far as practicable, should promote the use of the best available safety techniques. Switzerland becomes the 19th Member State to have ratified this Convention.”

At the end of the ceremony, the ILO Director-General thanked the Swiss Government in the person of Mr Boris Zürcher, Head of the Labour Directorate, State Secretariat for Economic Affairs (SECO), as well as the country’s workers’ and employers’ organizations for their “continued commitment to the strengthening of occupational safety and health as set out in ILO instruments.

Convention 170 and Convention 174 will enter into force for Switzerland on 7 March 2023. With these new ratifications, Switzerland will now have ratified 62 conventions and 1 protocol. For more information, see the NORMLEX database .

iSchoolConnect to host Career Development Conclave 2022 on “How…