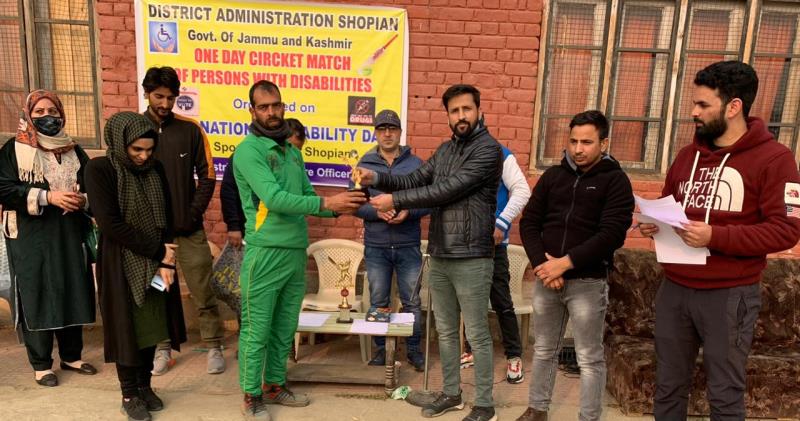 Shopian: A fascinating 10 overs cricket match marked the celebration of International Day of Persons with Disabilities (IDPWD) at Shopian.

The match was organised by the District Social Welfare Office at sports stadium Batapora and two cricket teams of Persons with Disabilities participated in the event.

Chasing a target of 89 runs set by Team A in 10 overs, Team B got all out for just 61 runs. Sayar Ahmad Malla was adjudged as man of the match for scoring 47 runs and taking two crucial wickets.

Progress of establishment of Youth Clubs reviewed at…

While interacting with the players, the District Social Welfare Officer (DSWO), Mohammad Shafait said the IDPWD is observed across the globe on 03 December every year to promote an understanding of disability issues and mobilize support for the dignity, rights and well-being of persons with disabilities.

He said organising a cricket match on IDPWD has been done with a purpose adding that the celebration is linked with spreading awareness about drug abuse and Systematic Voters’ Education and Electoral Participation Program (SVEEP).

The DSWO called upon them to value their vote by exercising their right to vote in ongoing DDC/Panchayat/Municipal elections. He also impressed upon them not to give in to drug abuse because of social stigma associated with disabilities and they should adopt a healthy life style.

Assistant Director Handloom and Handicraft, Ashfaq Choudhary, TSWO Farhana Tak, entire team of Social Welfare Shopian and Person with Disabilities from across the district were among others present on the occasion.