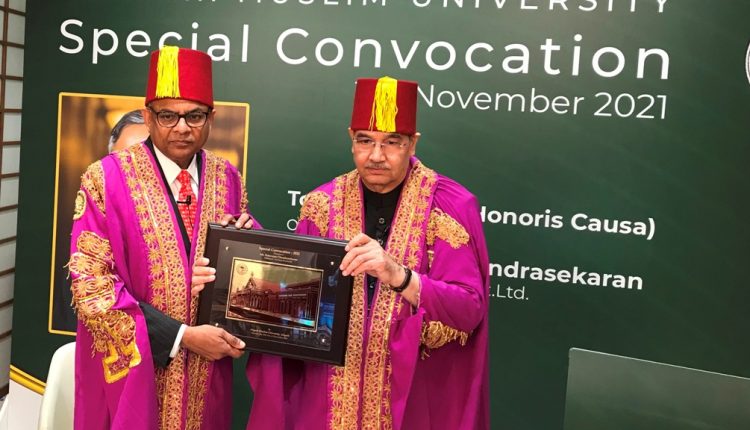 Aligarh : “Every Indian must be provided with a ‘minipad for life’ a smart device with data and connectivity allowing them access to education, health, and upskilling, if India wants to go from $ 3 trillion to $ 12 trillion economy”, said Mr Natarajan Chandrasekaran while accepting the Honorary, Doctor of Science (DSc) Honoris Causa Degree in a special virtual convocation ceremony of the Aligarh Muslim University (AMU).

It might not look the same as pre-Covid convocation celebrations; but the AMU community in its true spirit celebrated the life and works of Mr Natarajan Chandrasekaran, Chairman of Tata Sons Private Ltd as he was conferred with the Honorary DSc Honoris Causa.

He was bestowed with the honour for his tremendous contributions as the Chairman of Tata Group, India’s largest private-sector employer—ranked as one of the World’s most innovative companies by Forbes and for generous, altruistic actions and lifetime accomplishments that have hugely benefited the Nation.

Accepting the honorary degree, Mr Chandrasekaran said: “It is my privilege to accept this honour on the behalf of all my colleagues at the Tata Group—who are the torch bearers of this Group. Our founder, Jamsetji Tata, firmly believed that the community is not just a stakeholder in business, but is in fact the very reason for the existence of any free enterprise. On March 28, 2020, during the initial breakout of the pandemic, the Chairman Emeritus, Mr R N Tata stated that, ‘The current situation in India and across the world is of grave concern and needs immediate action. Tata Trusts and the Tata Group’s companies have in the past risen to the needs of the Nation. At this moment, the need of the hour is greater than any other time’. Under his guidance, the Tata Group was quick to respond to the situation to support the Government of India and fellow citizens in our collective fight against the pandemic”.

He added: Tata group companies, wherever we are present, have put communities first. Our group has focused on healthcare, livelihood and education, among other things, as the core tenets for the upliftment of the communities.

Mr Chandrasekaran stressed education as the backbone of any country.

He said: “In India, we have more than 250 million Indians below the age of 14—more than twice the size of the entire population of the United Kingdom. Every month, a million more Indians join the working population. We must see these human resources as a tremendous potential. How we educate, train and inspire our people will be the key to our country’s prosperity”.

“Technology is evolving rapidly; Environment and Sustainably standards are changing the way we live and work. These are pushing the boundaries of innovation and research. Innovation is taking place not just in different sectors but at the intersection of sectors. A new economy is developing. It has an exciting potential for India. But in order to, not just participate but to become world leaders, we need to upgrade our education system; invest in research and innovation; create ecosystems and a culture of openness and collaboration – so that innovation can flourish. If we can deliver this, with our large pool of human capital, we can not only create tens of millions of jobs but also accelerate our GDP per capital to more than $5,000 by the end of the decade. How we educate, train and inspire people will be the key to our country’s prosperity”, pointed out Mr Chandrasekaran.

“India must increase its Research and Development spend and invest in technology and Intellectual Property ownership – encourage Indian Universities to partner among themselves and with other overseas universities. We need to create Tech city clusters with connectivity, skill ecosystems and access to risk capital. Where Indian talent, learns in India and transforms India. We need to focus now on modern technologies and data. India is a leader in software services and must become a world leader in Data. We need to lay emphasis on Artificial Intelligence, 5G, Quantum computing and electronics and create common standards and protocols on privacy, data storage, taxation, market access, immigration, and cyber security partnership”, he said.

Mr Chandrasekaran called for a greater collaboration between academia and private sector on developing a strong research and development culture that can unleash a tremendous cycle of innovation. The reimagining of India’s education into a system that nurtures agile and digitally native problem-solvers is the greatest investment we can make for India’s future.

In the welcome address, AMU Vice Chancellor, Prof Tariq Mansoor emphasised that many AMU students have been employed in various companies under the TATA group over the years, including TCS.

“AMU looks forward to your continued patronage for our students in the future. We are also hopeful of your guidance in harnessing the entrepreneurial potential of our students and support to the incubation and startup cells in Engineering and Management studies”, said Prof Mansoor.

He pointed out: AMU takes pride in educating the economically weaker sections. We have one of the lowest fee structures and I request Mr Chandrasekaran to consider support for our University under the Corporate Social Responsibility projects of the TATA Group.

The Vice Chancellor, Prof Mansoor said: “Mr Chandrasekaran is a great role model for all of us, and especially for the upcoming entrepreneurs. His life journey is a shining example of self-made success achieved on the fundamentals of sincere hard work, honesty of purpose and dedication. As one of the tallest corporate leaders, his leadership is underpinned by the values of integrity, ethics, excellence and devotion to social responsibility”.

He added that the AMU fraternity is privileged to include Mr Chandrasekaran in the illustrious group of recipients of the Honoris Causa in the past, such as Pandit Jawaharlal Nehru, Dr Rajendra Prasad, Lal Bahadur Shastri, Dr CV Raman, Dr APJ Abdul Kalam, Prime Ministers, Presidents and Kings of nations such as Saudi Arabia, Malaysia, Germany, Iran, Egypt etc.

“The hallmark of Mr Chandrasekaran’s personality is his vision, modesty, flexibility, affable nature, listening to all points of view, reconciling different points of view and consensus building. He is providing able leadership not only to some of the biggest corporate entities in India, but also to prestigious Academic Institutions like IIM Lucknow and other important bodies all over the world”, added Prof Mansoor.

He emphasised: Being successor to an Iconic Personality like Mr Ratan Tata is itself a monumental achievement, and I am sure that further success in various spheres lie ahead in Mr Chandrasekaran’s path, and he will be instrumental in shaping important and new institutions, including the rejuvenation and restoration of glory to our national carrier—AIR India. In the words of Mr Ratan Tata himself, ‘The decision reached by Tata Sons was totally based on the study undertaken and concluded by those under the leadership of Group Chairman, Mr Chandrasekaran’.

The Vice Chancellor said that the distinctive feature of Mr Chandrasekaran’s approach to corporate leadership is that greater common good and human welfare are at the centre of his vision for the future.

“He sees the centrality of the role of artificial intelligence and digital transformation in India’s roadmap for success. His book, ‘Bridgital Nation’ presents a powerful vision on how we view technology. Instead of accepting technology as an inevitable substitute for human labour, it uses it as an aid. Instead of taking away jobs, it can create new jobs”, further pointed out the Vice Chancellor.

Speaking on the history of AMU, the MAO College was established by Sir Syed Ahmad Khan, and this college was upgraded to University in 1920. The MAO College was a monument of large hearted tolerance, pure morality, free thinking and communal harmony.

“We are now a leading institution in teaching, research and innovation and want to achieve the national goals of a self-reliant, technologically strong and modern India and build an integrated modern system of education, in accordance with the new education policy for sustainable development of society. AMU is consistently getting high ranks from various ranking agencies, the NIRF of Ministry of Education ranked us 10th among Indian Universities and 4th in research among Universities in India in 2021. Our Jawaharlal Nehru Medical College (JNMC) is ranked 15th among more than 600 Medical Colleges and the Law Faculty has got 10th position. Meanwhile, the Times Higher Education has ranked Faculty of Life Science on the first rank among Indian universities”, said the Vice Chancellor.

He pointed out that the Prime Minister, Shri Narendra Modi Ji termed AMU as ‘Mini India’ during his Centenary Celebrations speech on 22nd December 2020.

“Recently the University played a significant role in the treatment, testing and vaccine trial in Covid-19 Pandemic. The Medical College of the University performed more than half a million RTPCR Tests and it was the first institution to enrol 1000 volunteers for the COVAXIN phase III trials sponsored by Bharat Biotech and ICMR. The University has also made efforts to address vaccine hesitancy among various sections of society in the country”, stressed the Vice Chancellor.

He emphasised: AMU is making all efforts to keep up with the latest advances in Science and Technology and has started new courses and centres in field of Artificial Intelligence, Robotic Engineering, Earthquake and Disaster Management, Green and Renewable Energy, Nanotechnology, Biomedical Engineering, Data Sciences, Cyber Security and Digital Forensics, Strategic Studies, Cardiology, Nursing, Paramedical Sciences, Critical Care and Pain Management among others.

Prof Mansoor further said that AMU has made efforts to take up the new challenges in the COVID-19 Pandemic era especially in the field of online learning and research.

“We sincerely hope and pray that with the massive vaccination programme underway in the country, full normalcy will soon be restored in all spheres including educational institutions”, he added.

“I invite Mr Chandrasekaran to visit our campus in the future and see for himself our history and heritage”, said the Vice Chancellor.

AMU Chancellor, His Holiness, Syedna Mufaddal Saifuddin, while welcoming Mr Chandrasekaran, said education cleans man’s inner self and also helps attain for him and his family.

He emphasised that trade is given utmost importance in Islamic ethos and the Prophet once urged people to look for sustenance in the earth’s hidden portals.

“Allah keeps those dear who work for the larger benefits of human kind and trade has been termed as a virtue granted by Allah to the humankind”, asserted the Chancellor.

He said education is the mantra to lead a pious and contented life and a duty for all men and women to attain it.