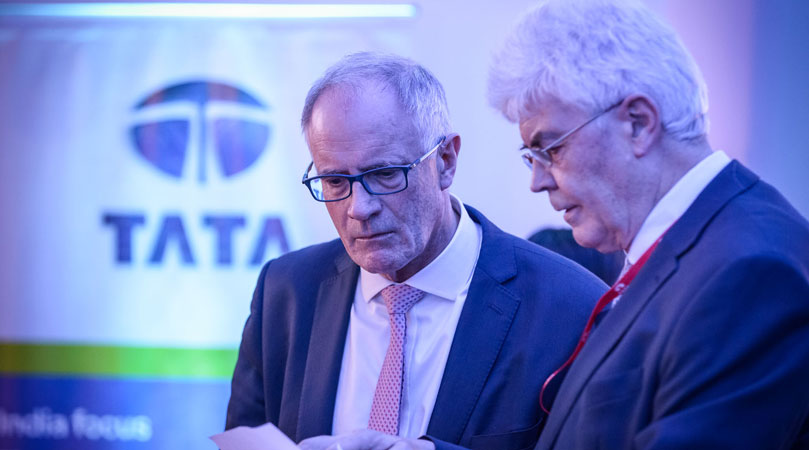 London: On March 20, 2017, Tata held its third European Annual Reception at The Royal Society in London.

Welcomed by senior representatives of the 19 Tata companies operating in Europe, over 500 guests from the worlds of business, commerce, politics and the media had the opportunity to experience some of Tata’s finest innovations born in the UK and across Europe, and learn how Tata companies are helping to shape the next generation of British creative thinkers, inventors, engineers and disruptors.

The showcases at the event included:

A model from Tata Communications showing how connectivity will help land a robot on the moon.
An exhibition from Tata Consultancy Services showcasing how technology is at the forefront of saving the planet.
A new virtual reality car buying experience by Jaguar Land Rover.
A test on guest’s on Tata knowledge with QuizBiz™, a social gaming app, created by Tata Interactive Systems.
Tata Motors’ TAMO Futuro Sports car fresh from unveiling at the Geneva International Motor Show.
A private screening of a film on the future of UK automotive presented by The National Automotive Innovation Centre.
Tata Steel demonstrating the everyday life uses of it products.
Tata Chemicals showing the lifecycle journey of products from creation to supply chain, to industry including a new brand of consumer salt.
The Tetley Smile Challenge from Tata Global Beverages.
An ‘elevator pitch’ competition with the National Association of College and University Entrepreneurs in association with Tata Capital and The Royal Society.
An aero model which shows real time data analytics for flight landing from Tata Technologies.
The unveiling of Taj Hotel’s third book of its ‘English Classics, Reinvented’ literary series, Sherlock Holmes.
The event was held at the Royal Society in recognition of Tata group’s support for its prestigious University Research Fellowship (URF) scheme. Tata’s support of the scheme gives more young scientists and engineers the opportunity to access the excellent support and career development that the URF programme provides. Three of the first recipients of the Tata University Research Fellows programme, Dr Alistair Boyer, Dr Simon Horsley and Dr Samuel Stranks, were acknowledged for their success in their respective fields of research at the event.

David Landsman OBE, executive director of Tata Limited, said, “Tata has been a part of Britain’s commercial landscape for more than a century, and over the past decade it has become an even more significant force, providing quality jobs, training and opportunities for more than 60,000 employees in more than 40 towns and cities across the UK. Its companies are well known for playing key roles in the UK’s industrial sectors but what is often less-well known is its role as Britain’s largest commercial investor in manufacturing R&D, and for its cutting edge expertise in areas from IT, to connected cars, to artificial intelligence.

University of Freiburg: Modern wind turbines can more than…

“We are proud of the role that Tata will continue to play in boosting the UK economy, enhancing the skills of our young people, and helping to realise global opportunities – as well as helping to forge even closer business ties between India and the UK.”

Nick Hurd MP, Minister of State at the Department for Business, Energy and Industrial Strategy, who was present at the event, said, “The government is committed to building an economy that works for everyone. Through our ambitious Industrial Strategy Green Paper, we have committed to driving growth across the UK, using major new investments in infrastructure and research to drive prosperity, creating more high-skilled, high paid jobs and opportunities.

“Tata provides quality jobs, training and opportunities for more than 60,000 employees in more than 40 towns and cities across the UK and is behind well-known brands such as Tetley and Jaguar Land Rover. Companies like Tata will play an important role in boosting our economy, realising the ambitions of our Industrial Strategy and expanding opportunities abroad as we forge a new role for ourselves as we exit the European Union.”

Sir Venki Ramakrishnan, president of the Royal Society, said, “We are delighted to host the Tata group and its European companies at the Royal Society. To someone growing up in India, the name Tata was legendary. Today, Tata has spread far beyond India to become a global company and it is wonderful to see Tata companies driving UK innovation as well as investing in the future via initiatives such as the Royal Society’s University Research Fellowships.”

Tata plays a global role in driving innovation for the benefit of communities, inspiring new advances in science, technology and service.

University of Freiburg: Modern wind turbines can more than compensate for decline in…

iednewsdesk Jun 24, 2022
The Chair for Electronic Components at RWTH Aachen University, together with AMO GmbH and the Phantoms…

Awareness programme on registration on e-Shram portal organised at…