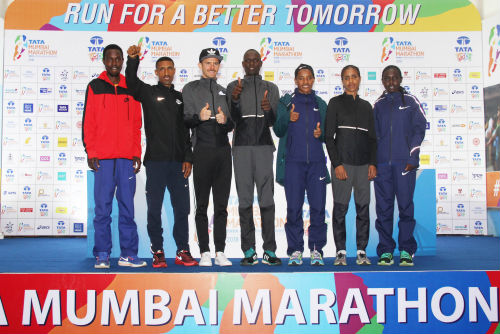 Could the TATA Mumbai Marathon 2018 set new standards for the classic distance in India?

Chennai : The leading men’s contenders attending Friday’s elite athletes press conference for the Tata Mumbai Marathon 2018 were unanimous in their prediction ahead of Sunday’s big event, it could be the fastest ever race over the classic distance ever witnessed in India.

The current course record is 2:08:35, set by Kenya’s Gideon Kipketer in 2016, and that also stands as an Indian all-comers record. However, with seven men in the field having career bests faster than that time and with race promoters Procam International having also assembled the strongest ever field in the history of one of Asia’s most prestigious marathons, that standard is clearly under threat.

“I’m in very good shape and I think I can run as fast as 2:06. A course record is possible, but I also want a personal best,” said Ethiopia’s Solomon Dekisa, the fastest man in the field.

Deksisa, 23, can boast of a best of 2:06:22 from when finishing second at the 2016 Rotterdam Marathon and he’s been in hard training for Sunday’s race since he finished third in the Toronto Marathon last October.

“I had the option of several other marathons, but I chose this race after discussing what I should do with my coach,” he added, attesting to the Tata Mumbai Mumbai’s ever-growing reputation among the world’s leading distance runner.

Kenya’s Joshua Kipkorir was second in last year’s race and, unperturbed by the presence of Deksisa and the other top runners, is determined to go one better on Sunday.

Kipkorir set a personal best of 2:09:50 in last year’s race but despite the relatively modest time by elite standards, he certainly has a very good chance of climbing to the top of the podium.

“I ran 2:13 at altitude for a marathon in Nairobi in November and that was simple, it felt no harder than a long training run. I think 2:06 is possible on Sunday and people tell me the race could be hot, but that doesn’t worry me,” said the ambitious Kipkorir.

His compatriot Evans Ruto, the 2014 winner in Mumbai, concurred on the question of the winning time.

“I feel I’m in good enough shape to regain my title and it might take a course record to do that,” commented Ruto.

The women’s course record of 2:24:33, also an Indian all-comers record, on paper looks like being a tougher target but a big boast for the race promoters came when they signed up the last two Tata Mumbai Marathon winners and Kenya’s defending champion Bornes Kitur will take on Ethiopia’s 2016 winner Shuko Genemo.

“I am in better shape than last year. I cannot say how much better, maybe just a little, but definitely better,” said the quietly-spoken Kitur.

The more gregarious Genemo was more expansive in her analysis and it is worth noting that she had a 2017 best of 2:26:06 at the Vienna Marathon and ran under 2:29:00 in her other two marathons last year,

“My preparation has been going well and I think my experience of running here two years ago will certainly be an advantage. In 2016, it was windy but not so hot as I expected and that was a big help,” added Genemo, who won by more than four minutes from Kitur in 2016.

“However, of course I would like to win and that’s what I am aiming for but if I do get a victory, I doubt it will be by more than four minutes. One of the reasons is that my friend Amane [Gobena] is here,” joked Genemo, turning to face the fastest woman in the women’s race, her fellow Ethiopian Amane Gobena.

Now 35, Gobena ran her personal best of 2:21:51 when finishing second in the 2016 Tokyo Marathon and returned to the famous race in the Japanese capital last February where she finished third in 2:23.09.

However, she did not race at all in the second half of last year and has arrived in Mumbai with fresh legs.

“I was told there was a chance I could go to the World Championships in London but when I was not selected I was so disappointed that I stopped training completely for two months before starting training again,” said Gobena. “But it means I am not tired now.”

Approximately 44,000 runners will take to the roads in Mumbai for the six different races in what has become an annual event in the city on the third Sunday of January.

* For more information about the Tata Mumbai Marathon 2018, the website of the event is:
https://tatamumbaimarathon.procamrunning.in/

Tata group, a global enterprise with combined revenues of around US$100 billion, along with Tata Consultancy Services (TCS), one of the world’s leading IT services, consulting and business solutions organisations, are the title sponsor of the Tata Mumbai Marathon.

Sport has always been an integral part of Tata for over 75 years. Tata’s association with multiple sports ranging from cricket, football, hockey, badminton, chess, athletics, mountaineering and motor racing, among others, has produced many award-winning sportspersons, helped the development of marginal communities and supported sporting teams, national and international events as well as training academies. The Tata Sports Club was set up in 1937 to encourage sports among its employee base across the country.

TCS is the sponsor of many premier global marathons across the world like the TCS New York City Marathon, the TCS Amsterdam Marathon, and the TCS Lidingloppet (the world’s largest cross-country run), and the technology partner of the marathons held in London, Chicago, and Boston — all part of the company’s effort to promote health and fitness in the communities, the world over.

A R Rahman to open the show for Shah Rukh Khan