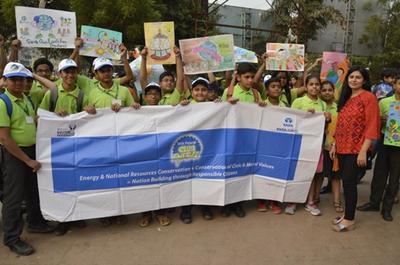 New Delhi: “Talent win’s games, but teamwork and intelligence win’s championships”, especially when it is won globally. Tata Power was recently conferred with global recognition the, “Edison Award” for its “Club Enerji #Switchoff2SwitchOn” campaign under Social innovation category and Social Energy Solutions subcategory. The Edison Awards, named after Thomas Alva Edison, recognises and honours the world’s best innovations and innovators. Being recognised with an Edison Award is one of the highest accolades a company can receive in the name of innovation and business success.

Comprising of a network of 533 participating schools, 3,47,986 Energy Champions and 3,86,633 Energy Ambassadors across India, this nationwide movement has helped save 29.8 million units of power since it started in 2007. The Club has various national and international accolades to its credit, to name a few:

· The Club Enerji movement was showcased at a prestigious, global platform – TEDx IIM Ahmedabad event on the topic: “Driving Conservation Through Shaping the Future Generation”

Ms. Shalini Singh, Chief-Corporate Communications & Sustainability, Tata Power, said, “Since its inception, Club Enerji has been one of the most successful energy conservation programmes in the country. Over the years, we have established a center of excellence and helped address climate change through various campaigns like, “Switch off 2 Switch On” that focuses on the need to conserve electricity by switching off appliances when not in use, “I CAN” and the ongoing ‘I have the Power’ campaign promoting the use of sustainable and green solutions.

Currently, we are in the 12th year and have been leading the change through this initiative and aim to continue inspiring Millennials and ‘Gen Z’ generations to build a sustainable India & make a difference by contributing to a cleaner tomorrow.”

The journey of Tata Power’s Club Enerji began in 2007 after Mumbai faced power shortage of 150MW. This initiative was launched in order to sensitise people on energy conservation by reducing wastage and prevent building new capacities based on fossil fuel. In the past 12 years, Club Enerji has touched many milestones of success with sheer dedication and support of school children and the administration. It has emerged as a successful model and has grown to become a global movement.

93% of India Inc. employees are stressed about returning to office, post the lockdown: Survey by FYI