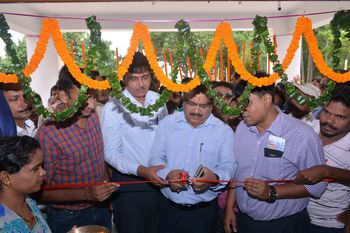 The school has been constructed at an expenditure of nearly Rs4.57 crore, besides furnishing the classrooms. Built by Jamshedpur Utilities and Services Company (JUSCO), a fully owned subsidiary of Tata Steel, the two-storey school building is spread across 25,000 square feet built-up area.

Kyushu University: Sniffing out your identity with breath…

Wageningen University & Research: The world can be fed…

Speaking on the occasion, Mr Kumar said, “It has been Tata Steel’s sustained endeavour to contribute positively to the quality of life of the community. Education is the important initiative under our CSR. We are focusing on education and educational infrastructure development. Education is important for growth and prosperity of the state and the nationm and Tata Steel is according priority on promotion of quality education. The construction of Adarsha Vidyalaya will harness the potential of students”.

To make quality infrastructure available to students in far-flung areas of Odisha, Tata Steel has signed a Memorandum of Understanding with the Government of Odisha to construct 30 Model Schools across the state. This initiative by the steel major is part of the Government of Odisha’s grand plan of setting up Adarsha Vidyalaya (Model Schools) in each block in the state. The model schools at Danagadi, Kamakhyanagar, Nayagarh, Korei and Dasarathpur constructed by Tata Steel were inaugurated recently. All efforts are being made to complete construction of the remaining schools at the earliest.

Wageningen University & Research: A closer look at challenges in the Sahel

Wageningen University & Research: The world can be fed with only plant-based…