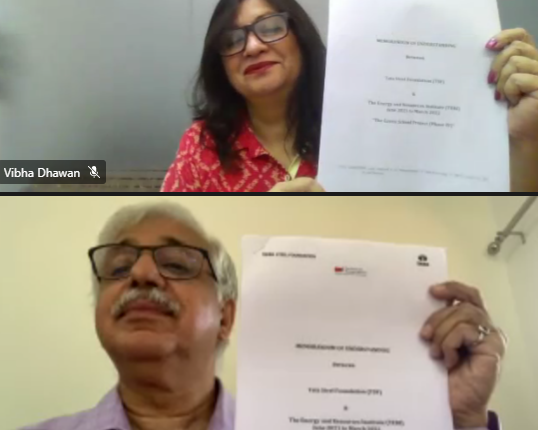 By India Education Diary Bureau Admin On Jun 5, 2021
Share
Mumbai: Tata Steel and The Energy and Resources Institute (TERI) jointly launched The Green School project in 2017. Over a period, the project has grown into a successful campaign that has inspired thousands of students to join the cause of protecting the environment. On World Environment Day today, Tata Steel Foundation signed a Memorandum of Understanding (MoU) with TERI for the Phase IV of The Green School Project.
The MoU was signed by Chanakya Chaudhary, Vice President, Corporate Services, Tata Steel, and Dr Vibha Dhawan, Director General, TERI in a virtual event — Navyata 2021, organised also to facilitate the remarkable efforts put in by students, teachers, schools and other stakeholders engaged in various aspects of the Green School Project. Pankaj Kumar Satija, Chief Regulatory Affairs, Tata Steel; Sourav Roy, Chief CSR, Tata Steel and Ms Neha, Fellow, Environmental Education and Awareness, TERI were present in the function along with other dignitaries from Tata Steel and TERI. More than 350 participants including school students, teachers, principals from member schools, guests participated in the event.
Speaking on the occasion, Chanakya Chaudhary said: “The Green School Project was cenceived with the very idea to build a generation of environment concious warriors who would conserve and protect the biodiversity and treasures of nature. The continuous degradation of resources, natural habitat of the millions of species has resulted in irreversible damage. It is upto us to not only just educate the young generation but also empower them with the right opportunities and tools to act upon the urgent need to restore the lost glory of our planet. Tata Steel realises this responsibility and has committed to a mission to prepare the next generation of Green Fighters who will find innovative ways to recreate the balance to co-exist with nature.”
Dr Vibha Dhawan said: “Since the inception of the project, we worked upon making environmental education and sustainability not just a part of the pedagogy, but more importantly, integral to the values and lifestyles of the students and the community. We now have model schools to be our ambassadors, as we endeavour to reach schools in even more remote areas. In these difficult times, this is a ray of hope.”
The Navyata 2021 ceremony began with the welcome remarks from Aparajita Agarwal, Regulatory Affairs, Tata Steel, followed by the screening of a video for felicitation of teachers, announcement of winners, a special address from Chanakya Chaudhary, and signing of the MoU.
Related Posts

Apr 30, 2022
The Phase IV of the Green School Project will focus on enhancing the capability of the students and teachers to empower them to take up self-modeled sustainable projects in the future. The proposal for Phase IV involves self-designed Green School Plans, e-booklets on relevant topics, intensive teacher’s trainings, Green School Buddy Programme, experiential workshops, expert sessions, to mentor students as ‘responsible citizens of tomorrow’. This phase will also bring in significant experience and impact on children’s education that vests with Tata Steel Foundation.
As part of the Community Impact Projects during Phase III, the schools in Angul, Odisha involved panchayats of 6 villages to perform tasks related to waste management, highlighting three concepts under waste management i.e. Refuse, Segregate and Reuse. Initiatives like Say no to plastic bags, segregation of wet and dry waste and reuse of waste materials to make 350 products ranging from pen stands, door mats, baskets, etc. were undertaken.
The students of Jajpur, West Bokaro and Jharia decided to work on Bird’s Nest making and install them on local trees. More than 1050 birds’ nests and 1200 bird feeders were prepared and installed at different places in their locality. To inculcate the habits of plant conservation and to develop the student’s affection towards the plants, students collected the seeds of various fruits and vegetables they use at homes and formed 270 seed collection banks. These seeds were planted in the kitchen gardens or distributed to others with a request to take care of the plants. Students from Joda and Noamundi created 300 herbal and 42 medicinal gardens and prepared more than 3000 paper and cloth bags and which were distributed among the community people to spread the awareness against use of plastic bags.
The Green School is a prestigious initiative supported by Tata Steel. It is being implemented at several operational sites of the Company in the States of Jharkhand and Odisha, by the Foundation and TERI. Several workshops, competitions, webinars, etc. have been conducted for the students while the teachers build up their skill set by participating in Sustainability Leadership programmes and hands-on workshops. A traditional knowledge book based on ‘traditional stories’ contributed by students along with expert essays emphasising on the importance of ‘traditional practices’ for the conservation of environment was launched on Earth Day 2021.
Winners of various competitions and activities conducted during the year under phase III of the project
St. Mary’s School, Jajpur, Odisha was the best performing school and won the ‘Green School Rolling Trophy’ where as Tata DAV Public School, Ghatotand, West Bokaro, Jharkhand adjudged as the second best performing school for the year 2020-21. Under the Community Impact Project (CIP) category, West Bokaro stood first position as well as Jharia and Jajpur shared second positions respectively in managing the activities within the project locations. Special recognition has also been given to project locations Angul, Joda and Noamundi for their exceptional contributions to the project.
Tata Steel FoundationThe Energy and Resources Institute
Share FacebookTwitterGoogle+ReddItWhatsAppPinterestEmail