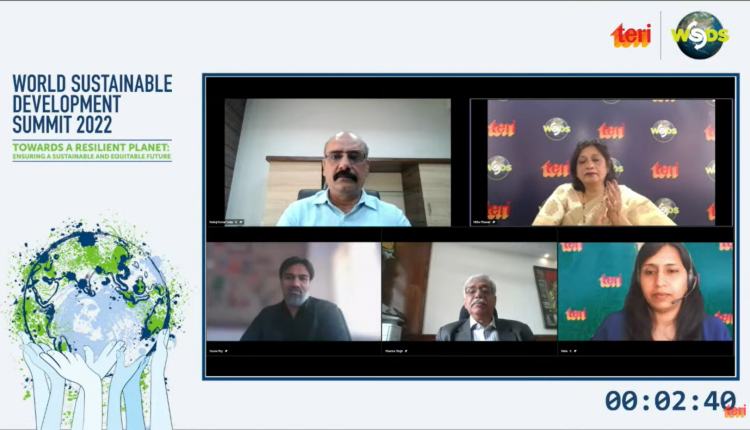 New Delhi : The Green School, a joint initiative of Tata Steel Foundation and TERI, participated in the ongoing World Sustainable Development Summit (WSDS) to showcase its work on climate change related issues and the various milestones achieved over the years.
Organised under ‘WSDS 2022’ thematic track titled “Futurists for the Future: A Younger, Greener Collective”, the session was attended by the students and teachers of the participating schools apart from the global audience. During the session, the key stakeholders of the Green School found an opportunity to bring forth their home-grown efforts and share it with the world.
The event witnessed a special address by Chanakya Chaudhary, Director, Tata Steel Foundation and VP (Corporate Services), Tata Steel, and Dr Vibha Dhawan, Director General, The Energy and Resources Institute (TERI). Pankaj Kumar Satija, Managing Director, Tata Steel Mining and Sourav Roy, Chief Corporate Social Responsibility, Tata Steel, also addressed the event.
“Children of today are our leaders for tomorrow, and they will be shaping the future of our communities. To harness their energy and help them shape a green and sustainable future, we started Green School five years back with just 10 schools. Over the years, the project has received very good response and now covers over 30 schools in Jharkhand and Odisha,” said Chanakya Chaudhary, Director, Tata Steel Foundation.
“With a goal of spreading awareness around climate change, we have been able to reach out to more than two lakh people, including students, teachers and parents through Green School. We have moved in phases and have been able to measure our success in adopting the concept of ‘Living with the nature’”, he added.
Launched in April 2017, the Green School is an initiative running across all the Tata Steel’s operational areas in Jharkhand and Odisha, wherein special attention is given to create a holistic environment where students and teachers learn and rediscover their connection with nature and make concerted efforts to conserve it through resource management initiatives at local levels.
During the event, a panel discussion on ‘Futurists for the Future’ was also organised that brought together environment heroes and green buddies who have done exemplary work in the field of the environment, intending to have a greener future.
“It is important for children to learn about the value of ecosystems and biodiversity. The impact of this teaching will be visible 20 years from now. These students will become leaders by then; they will bring into practice the training which they have undergone now,” said, Dr Vibha Dhawan, DG, TERI.
A significant outcome of this thematic track was the launch of an E-module titled ‘Enroute to Green’ and a Handbook – ‘Green Shoots: Cases which Herald a Greener Future.’ This is an amalgamation of knowledge, experience and action-based work done by the direct stakeholders of the project i.e. students and teachers as change-makers and taking the narrative further in their context.
The session also catered to discussions on the importance of education in channelling young adolescents’ actions towards a greener future.
Naman Gupta, Founder of Code Effort Pvt. Ltd., who has been recycling cigarette buds, and Kalicharan Basumatary, who has been elemental in restoring the Manas National Park, were some of the members of the Green School who presented their work to the world during the summit.
Young change-makers of the Green School called as “Green Buddies” are taking initiatives at their level to ensure a new era of a greener planet is ushered in. Three of the Green Buddies, Sejal Kumari, Student from St Mary’s School, Noamundi, Dimple from Tata DAV Public School Ghatotand, West Bokaro, and Saina Mohanty, Student from St. Mary’s School, Jajpur, presented their initiatives to the world attracting applause from the audience.
“I am glad that this journey has enabled the youth to voice their views collectively, exchange ideas and form a common network, reaching out to like-minded people and engaging them in environmental stewardship,” added Dr. Vibha Dhawan.

iednewsdesk May 19, 2022
Muslims have shared their experiences of living with mental health problems as part of a training course…

University of Liverpool: Developing a next-generation therapy for knee…