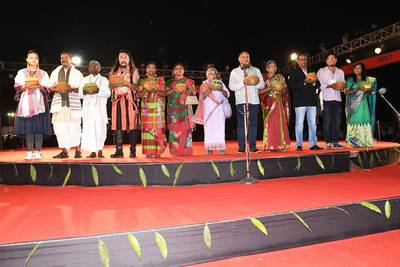 Jamshedpur: Tata Steel today inaugurated the fourth edition of its Tribal Conclave ‘Samvaad’ 2017. The event was unfolded traditionally to the beat of 111 Nagadas (kettle drums) at Gopal Maidan, Bistupur. The theme for Samvaad 2017 is Aspiration of Tribal Youth and Leadership for Future. The opening ceremony was attended by tribal guests and opinion leaders, senior executives from Tata Steel and group companies, among others.
Marking a significant change from the last editions, Samvaad this year aims to draw tribal representatives internationally from Australia, Canada, Kenya, Laos and Zimbabwe. The visitors at Samvaad will also be able to catch some sporting action across November 16-19. Thanks to National Tribal Sports Festival, a first-ever feature would be four action-packed tribal sports — Naga Wrestling (Chakhesang tribe, Nagaland), Hambi Kepathu (Karbi tribe, Assam), Kati (Santhal tribe, Jharkhand and Odisha) and Sekkor (Ho tribe, Jharkhand).

Sunil Bhaskaran, VP, corporate services, Tata Steel, while addressing the gathering said, “This is the fourth edition of Samvaad and the theme for this year welcomes tribal youth to share their personal stories. We look forward to cross pollination of ideas and participation of tribal leaders not just from India but from five different countries as well.”

The event will witness an exchange of thoughts on critical issues, including malnutrition, tribal medicine, livelihood, indigenous culture, heritage, arts and inheritance with the visiting guests and India’s very own tribal communities who will travel from the length and breadth of India. As many as 103 tribes from 127 districts, representing 21 Indian states, will be converging at Samvaad 2017. As part of this year’s theme, 500 tribal youth, including young men and women representing 103 tribes would go through a structured leadership programme, which will be imparted through a series of workshops that would be conducted by eminent subject matter experts at Tribal Culture Centre, Sonari. The participants will be sharing their tales of transformation, struggles, sacrifices and successes. Nobel laureate Muhammad Yunus and Padma Shri Shantha Sinha will delve deep in discussions with these youths to bring out the best in them.

Age-old medicines, on which tribal communities deeply rely on despite modern healthcare services, can be observed from close quarters at an exposition on tribal medicines at Gopal Maidan. Those looking for fulfilling their gastronomical urges, Tribal Food Festival at Samvaad would be the place to be. Facilitated by the Taj Group of Hotels, the food festival will dish out authentic tribal cuisines. This venue will erupt in multifarious colours each evening, with cultural performances that will be staged by tribal artistes on all five days. Adding to the excitement at this venue will be a handicraft exhibition-cum-sale.

iednewsdesk Jan 21, 2022
The different types of abuse, whether of a sexual nature, of authority and of conscience, have a strong and…