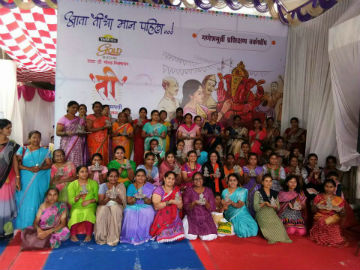 Pune: Lokmat, Maharashtra’s and Pune’s Number 1 newspaper, celebrate Tata Tea Gold Mixture ‘Tee’cha Ganpati, the most pious initiative introduced with an intention of leading it entirely by a strong team of women presented by Tata Tea Gold Mixture, a leading player in the Indian tea market.

Lokmat media house had created this initiative thus signifying a social change. While the most important part of this initiative would be about engagement, their focus is to spread the cause much wider. This is an opportunity for women of Maharashtra to come forward, celebrate Ganeshotsav and bring the social change.

Tata Tea Gold Mixture from Tata Tea, a leading player in the Indian tea market and Lokmat, had taken up the baton to bring a change in the society and create a positive impact through this initiative with a message of equal rights for everyone in the society. The motto of this campaign is to give first respect to every women while celebrating this Ganeshotsav by giving her first right to do every ritual from Ganesh Sthapna to Visarjan. We encourage people to celebrate this Ganeshotsav by giving first preference and respect to women by letting her do Ganesh Sthapna, Pooja and send us pictures of same at facebook/Teecha Ganpati.

Traditionally, Ganeshotsav is a male dominated festival, wherein man in the family performs all main rituals while women is left behind. Lokmat will enable women in Ahmednagar, Sangli, Aurangabad and Beed to come forward and organise all-women managed Ganesh Pandals that will be talk of town. Various other activities like Eco Friendly Idol Making Workshop for Lokmat Sakhi Manch members& their Kids, Ganesh Sthapna, Aarti with celebrity, cultural programs and Ganesh Visarjan all led by women. Some of the prominent women will be awarded with Tata Tea Sarv Gun Sampann “Tee”cha awards for their extraordinary work and contribution to the society. Along with great print led engagement, this initiative will be promoted through 360 degree marketing for creating event buzz and engagement thus aimed at providing immense value to all partners.

Speaking on the occasion Mr. Rishi Chadha, Head Marketing – Tea, Tata Global Beverages said, ‘‘Tata Tea Gold Mixture salutes the multifaceted, confident Marathi women of today who is equal to a man in every domain – be it at work or home. And this year for Ganpati, the women will take the lead and do everything from Murti Sthapna to Visarjan. Our Tea is inspired by this spirit of women and offers 3 benefits – Daat, Kadak, Sungandhit – in a single cup. Ek Chai 3 Kamaal – A multi-faceted Tea for a multi-faceted woman.”

Speaking on the occasion Mr. Aniruddha Hajare, VP & Business Head, TapLight, an Experiential Marketing arm of Lokmat media Said, Lokmat has been very active by taking up social causes that brings change in the society. When like-minded brands like Tata Tea Global Beverages finds synergy to connect with their TG by associating with such campaigns, the outcome is overwhelming.